App-loaded mother of all concept albums from Icelandic myth-maker... 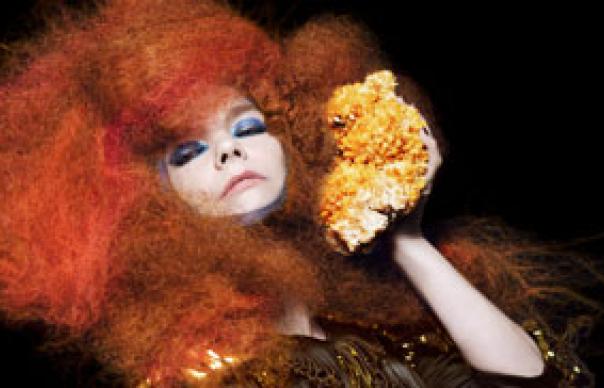 Never let it be said – not that it ever is – that Björk Guðmundsdóttir lacks ambition. Since 1993’s Debut, Iceland’s most famous citizen has repeatedly stretched pop’s boundaries: electronica, jazz, choirs, Africana, classical orchestras, fashion, art and film have gone into her intoxicating mix, though what emerges is always unmistakably Björk. That octave-leaping voice alone – sometimes hushed, more often yelling, so it seems, from the top of a glacier – ensures her uniqueness, even before the latest crazy outfit is unveiled.

Biophilia is über-Björk, weirder, wilder and way more ambitious than anything she’s attempted. Inevitably it’s not just an album but ‘a project’, one that involves interactive iPad apps for its 10 tracks, a set of invented instruments (among them a digital pipe organ and a spark-spewing Tesla-coil bass), a 90-minute movie documentary, plus the usual videos and remixes and a startling live show. It comes in five forms, from a modest CD to a hand-tooled oak box containing 10 colour-coded tuning forks (yours for £500).

The concept that ties together this hoopla – which includes educational projects in science museums – is ‘an exploration of the universe and its physical forces’, the point where science, technology and music intersect. By way of an introduction comes no less than Sir David Attenborough, describing Biophilia the concept as “the love for nature from the tiniest organism to the greatest red giant in the farthest realm of the universe”.

Astonishingly, Biophilia the album delivers just that, though in a way that will make science hardhats twitch; remember, everything that goes into the mix comes out Björked, even the life of the virus or the subterranean growth of crystals. The opener, “Moon”, for example, is only tangentially about lunar orbits and gravitational pull, instead it’s a song about starting anew, about being “all birthed and happy”, “adrenaline pearls” and “the lukewarm hands of the gods”. Not much science there, though there’s some beautiful harp-playing from Zeena Parkins, underpinned by faltering bass beats.

For a high-concept album, Biophilia is surprisingly minimalist, its melodies picked out on chimes, pipe organ, harp and strings while Björk murmurs and wails above and programmed sub-bass lines stalk and growl below. The resultant atmospheres are stark and strange, propelling us into the cold vacuum of space on “Cosmogony” and plunging into the turbulent depths of earth on “Mutual Core”, where she sings of “tectonic plates in my chest”, turning a song about earthquake and volcanoes into a love song: “this eruption undoes stagnation/you didn’t know I had it in me.”

Oh but we did! Over the years volcano Guðmondsdóttir has erupted regularly – “Pluto” from 1997’s Homogenic is something of a template for Biophilia – but Björk’s explosive side isn’t always her best, encouraging her to shout rather than sing. “Thunderbolt”, with its scary Tesla bass, is a case in point. More appealing and subtle are “Crystalline”, with its quirky melody and shuffling beats (and kid-friendly video), while “Virus” repeats the trick of turning science into love song, glockenspiels tinkling while Björk coos “as the protein transmutates I knock on your skin – and I am in”.

Mostly, though, Björk reaches for strangeness. “Dark Matter” is appropriately mysterious, its organ droning like an off-key hymn while she delivers a quavering vocal. “Hollow” is equally weird, its ruminations on ancestry (“thread me on this chain, the everlasting necklace”) driven by a marching synth rooted in C20 classicism – Holst’s “Mars, Bringer of War” for example. Less foreboding is “Sacrifice”, another piece of offbeat instrumentation (a gamelan-like celeste keyboard) with clever lyrics about the abuse of mother nature. You may not be whistling these songs or dancing to them, but Biophilia’s unsettling visions are compelling art.
Neil Spencer