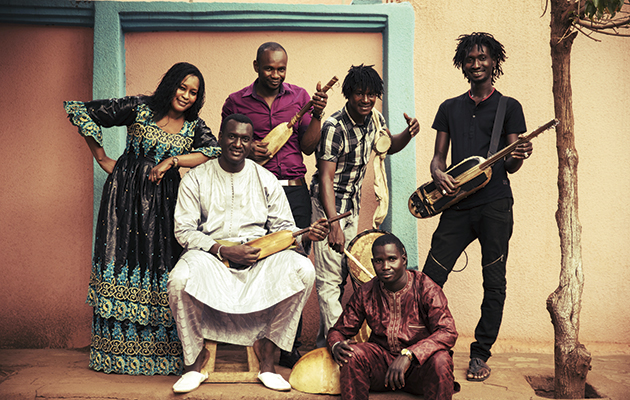 On the cover of Bassekou Kouyate’s fifth album, his huge hands grasp a tiny instrument that to the uninitiated looks like a child’s toy. With its four strings, tiny body covered in cow hide and short, fretless neck, Kouyate’s ngoni is an invention of such modest simplicity that you wonder how he coaxes such a mighty sound of it.

The answer, of course, is that after paying his dues as a backing musician with Ali Farka Touré and Toumani Diabaté, the Malian virtuoso revolutionised the centuries-old instrument on his 2007 solo debut Segu Blue, adding pick-ups and wah-wah to the ngoni’s raw and earthy banjo-like acoustic plucking. Playing with a dynamic rock’n’roll energy and wielding the instrument like an electric guitar rather than performing in the customary seated position, he was swiftly dubbed the “Hendrix of the ngoni”.

On first hearing, admirers of those albums may feel that Miri represents a step back. “I have two kinds of people listening to my music,” Kouyate once noted. “African listeners, who understand what I’m telling them, and people in Europe and America, who listen to my music for its vibe but don’t get the lyrics. I wanted a contemporary sound for those listeners. But the balance is to maintain some tradition to please my African audience.”

Miri tilts that balance back towards African tradition. It’s an album on which – metaphorically at least – he reverts to the seated position in which the ngoni was played since time immemorial until the revolution he brought about. The album’s title translates as “contemplation”, and it’s a fitting description of a quieter, more thoughtful set steeped in the folk styles of the Manding and Bambara empires that dominated West Africa for centuries, though the songs exist trenchantly in the here and now, addressing the political and social concerns of modern Malian society.

The good news is that despite the absence of the distortion and effects pedals heard on Kouyate’s last two albums, there is still plenty of invention and crisp note-bending to entice and thrill western ears, from “Wele Ni”, on which he plays the ngoni blues with a bottleneck, to the pneumatic, funk-fuelled rhythms of “Konya” on which his snapping lead lines duel with the electric guitar of Snarky Puppy’s Michael League.

There are plenty of other guests, adding global flavours from Brooklyn to Marrakech, via Havana. Yet at its heart, the record is a family affair, built around Kouyate’s five-piece band Ngoni Ba, featuring the soulfully keening lead vocals of his wife Amy Sacko, sons Madou Kouyate (bass ngoni) and Moctar Kouyate (percussion) and his niece Kankou Kouyate on backing vocals. The family ensemble is heard at its most intimate on the gently rhythmic opener “Kanougan”, an acoustic love song with the lilt of a lullaby that evokes bucolic dream images of Kouyate’s village on the banks of the Niger, far from the noise and turbulence of the capital Bamako, where he’s now based.

“Deli” finds Kouyate’s ngoni rippling with a kora-like elegance rather than the fierce, jagged notes for which he’s become famous. “Kanto Kelena” is bluesier ,with a gritty vocal from Habib Koite on the sort of tune you might find on an Ali Farka Touré album. “Wele Cuba” is a simmering Buena Vista…-style jam that pays tribute to the influence of Cuban rhythms on West African music with Yasel González Rivera from the reggaeton duo Madera Limpia adding spirited salsa vocals.
The instrumental title track contains some of Kouyate’s most virtuosic playing, plangent cascades of notes with almost a flamenco feel, topped only by “Wele Ni” on which his ngoni sounds like Ry Cooder in the slide zone.

As a back-to-the-roots album which at the same time packs a vital contemporary relevance, Miri does everything you could ask and more. “Pour savoir où vous allez, vous devez vous rappeler d’où vous venez,’’ as they say on the streets of Bamako. To know where you’re going, you have to remember where you’ve  come from…