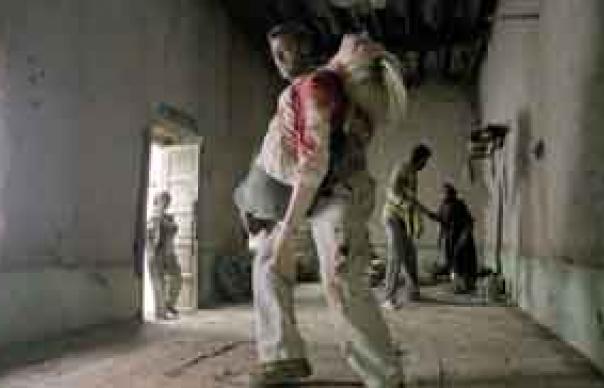 As in his previous two films, Inarritu weaves in and out of several stories, all loosely linked on some profound level. An American couple struggle to survive a shooting in Morocco; the young shooters panic; a nanny illegally takes two children on a trip to Mexico; a deaf Japanese girl, in Tokyo, rebels against her father. All are striving to cross the barriers that thwart communication between contrasting “types” of people, wherever they live.


THIS ambitious, confident film closes a triptych from Inarritu, a “trilogy of life” which exploded forth with 2000’s Amores Perros and dug deeper with 2003’s 21 Grams. Increasingly, big names are keen to work with him: Pitt and Blanchett come on board here for parts less dominant and glitzy than they’d normally expect, while Bernal returns to thank the director who made him possibly the world’s hottest young star. Yet an Inarritu film is all about range, and so the less celebrated members of the cast are equally important to the impact. And Babel has impact to burn. The further Inarittu stretches, the more he impresses – his panorama is both serious and spectacular.

Some studio stars may have shied clear of Inarritu’s sometimes overbearing penchant for portent and gravitas. Like 21 Grams, this is generally as cheery as a rain-swept funeral: Babel (his final collaboration with co-writer Guillermo Arriaga) sees the bad in everything, the hopelessness of many human relationships. But it also sees the flickers of good, and the flecks of hope, and that duality is what makes his eye so special. We’re not just talking film stocks – although the skilful way he emphasises subtle cultural differences with grain textures and colour quality is great. Babel really earns its self-regard and high opinion of itself, through risk, bravery and denial of easy compromise.

It seems hilarious now that, on the basis of tripartite structure, Amores Perros was compared to the flashy Pulp Fiction, that Inarritu was tritely hailed as “the Mexican Tarantino”. He’s no pop-punk phenomenon; he’s the real deal.
Babel – playing on its Biblical title (God punishes the hubris of humans by giving them incompatible languages) – seeks to point out and combat culture clashes: so topical today in the realms of belief and religion.

Inarritu’s ideal would be an film made in Esperanto. We begin in sandy Morocco, where two Muslim brothers foolishly play with a gun. A shot hits a bus in which an exhausted travelling American couple, Richard and Susan (Pitt and Blanchett) sit: Susan is seriously wounded. They desperately seek help in alien terrain, and the stresses of their marriage undergo extreme pressure. Meanwhile, in California, a Mexican immigrant nanny (the magnificent Adriana Barraza, from Amores Perros) cannot leave the two children in her care but also cannot miss a family wedding back “home”. Her brother (Bernal) is a charming, dangerous influence, whose resentment against the US is just waiting to boil over.

Another strand unfolds amid the neon, noise, steel and glass of Tokyo (and Inarritu’s smart edits maximise the contrast). Here, the deaf-mute teenager Chieko (Kikuchi) would be a suspect device if the film didn’t so magically evoke her own sensory world in this most over-stimulated modern city. Chieko’s confusion between affection and sexuality is electrically drawn – a scene where she “enjoys” a night-club is exhilarating.

The jolt, when we cut back to the stifling desert, is visceral.
Credit must go to the performers, both the marquee names and the unknowns. Pitt – wearing industrial-strength ageing make-up just to appear 49 instead of his own 43 – quickly shakes off his star presence to convey mid-life worry and doubt. Blanchett manages to find layers within a role that’s basically lying on a filthy floor bleeding and pissing herself. If Bernal isn’t at his most convincing, that’s because Barraza’s operatic angst leaves him in her tall shadow. Kikuchi’s deaf-mute may be overlooked next to these bonfires, and considered merely “promising”. But once the film’s raw power seeps through the viewer’s consciousness for a few days, it’s her bewilderment, her keenness to find a ray of light, that’s most unforgettable. Without any words, she expresses the reflex to communicate with tangible passion.

The stories gradually gather urgency, heat and pain. Everyone suffers. Lots. The eventual revelations that offer tie-ups aren’t perfect: in truth, some are vague, perfunctory even. Yet the epic’s tide of emotion – set up by earlier, thorough restraint and graphic detail – is irresistible. While it mostly avoids sentimentality, it’d be a cold viewer who didn’t come out of the film feeling more compassion and simpatico towards strangers than he took in. It’s a tough theme to pull off, this personal/universal, we’re-all-hurting-in-any-language motif. Babel brings it home. In a sound-bite century it stares tragedy in the eye, scrapes away the mindless babble.