Arctic Monkeys At The Apollo 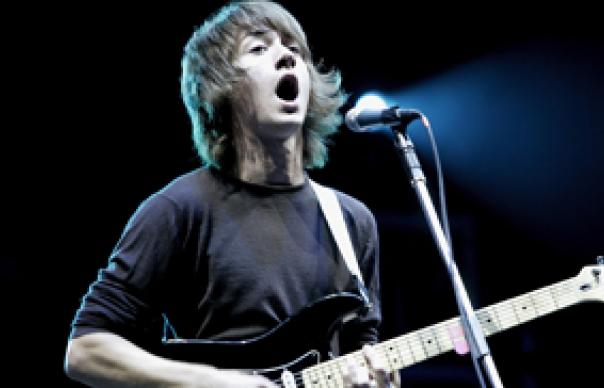 Concert films are often horrible things. Why anybody would want to have a big loud exciting experience in a hall full of noise and singing shrunk down like a crisp packet on a radiator to a small speakered, small screened, jump cut-edited DVD is one of the great mysteries of rock. The human attention span, which might be able to cope with a live album, is severely tested by being asked to look at four or five people playing instruments on the same stage for 60 minutes. And frankly, some crappy “inserts” of the group talking about themselves in a dressing room, or meeting Japanese fans, or gurning at the camera, are not going to be that thrilling.

All these thoughts and more run through the mind when taking this DVD out of its tiny sleeve. But there is good news for modern man here; this is not bad at all. Directed by The IT Crowd’s Richard Ayoade, who also directed the Arctic Monkeys’ “Florescent Adolescent” video, this film is very much what it says it is; a film of a live concert by The Arctic Monkeys at… well, you can see where they’re going with the title. And that’s both its flaw and its brilliance. With an utter lack of flash, the film – like the band – is almost completely devoid of effects, irrelevant detail or general flash.

There’s the odd bit of split screen and that’s it. Even the occasional lulls between songs, those weird bits in gigs when things stop happening for a minute and nobody ever seems to know why, have been left in. And if you’re a fan of drummers drinking lager, you’re in for a real treat at 42 minutes and 20 seconds. But cameras move about enough and the whole things suits and mirrors the band’s own style, which is hard work and talent disguised as effortlessness. It’s more and more effective as the concert goes on, and gives the viewer the feeling that they’re at the gig, rather than locked in the editing suite with a maniac. Asides become high points – one doubts that Mick Jagger has ever told an audience, “I’m in two minds as to taking this jumper off,” – while the band’s Spartan energy is enhanced by Ayoade’s methodology.

So what’s it like beyond the camera-pointing? On record, Arctic Monkeys sound pretty live anyway, so the songs come over well; loud and spotty and splenetic. Alex Turner’s lyrics have a splendid I Am A Camera, witty and distant quality to them that isn’t served well by idle comparisons to Jarvis Cocker and that one from The Smiths. This film serves very much as the old snapshot of a moment in time, although what that time is in the Arctic Monkey’s career is, right now, hard to say. Certainly one wonders if their commercial peak has been reached; but for now this film shows a far from ordinary band doing a very good job all round. Arctic Monkeys fans will fail to even go near a sense of disappointment; the rest of us will make a mental note to congratulate them and their film crew should we be seated next to them at dinner some time. Well, it could happen.

What else? Well, it was filmed in Super 16 in 2K digital camera with 5.1 surround sound, and there’s some grainy footage at the end of the band running around on a beach, and a really nice feedback noise. And there are 20 songs, including all the hits, and they don’t do anything by The Last Shadow Puppets. And that’s pretty much it.