Canadians' fifth parties on the edge of the abyss 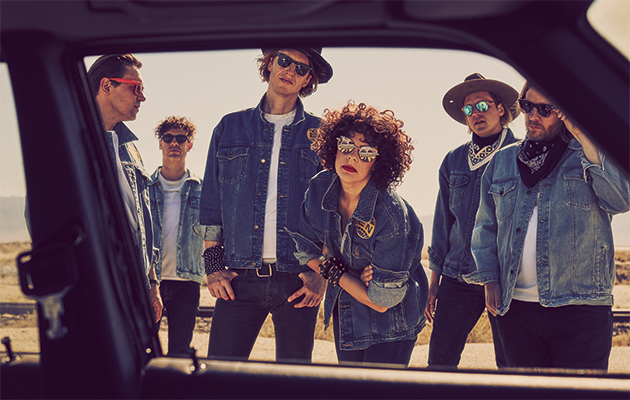 The bulk of Arcade Fire’s fifth album was recorded in New Orleans, and mixed in the city at the precise moment when the libidinous festivities of Mardi Gras collided with the dawning of an era of unprecedented political cynicism in the US. Little wonder, then, that Everything Now bristles with the humid, slightly hysterical energy of a party thrown at the edge of the abyss. It’s a record that makes maximum yield from competing tensions: old world traditions and new world technology; limitless leisure and endless angst; despair and hope; simple tunes and complex emotions.

Created in the band’s own Boombox Studios in the Crescent City, with further recording in Paris and Montreal, Everything Now feels like an urgent rebirth. The deliberately sprawling Reflektor was heavily influenced by Haitian rara, racine and Caribbean rhythms. Something of that flavour is retained here – “Peter Pan” is skeletal, dub-inflected post-punk; “Chemistry” breezy, faux-naïf ska, punctuated by terrific Dexys horns – but these elements form only a small part of a wider fabric that encompasses disco, electro-pop, new wave, funk and African rhythm, with smatterings of country, gospel and Baptist hymns.

The surprise is how cohesive it all is, the disparate influences expertly corralled by the band and a creative team headed by Pulp’s Steve Mackey, Thomas Bangalter of Daft Punk, Portishead’s Geoff Barrow, and the band’s long-time co-producer, Markus Dravs. In contrast to Reflektor, Everything Now is tight and punchy. The tunes come tumbling one after the other, and the sonic blend is frequently thrilling. “Good God Damn” is essentially Television’s “Marquee Moon” arranged by Allen Toussaint, and easily as good as that sounds. The relentless, spiralling groove of “Signs Of Life” is gumbo-disco. While the bass and horns are pure Bourbon Street bump, the laser synth line and Win Butler’s half-rapped vocals are indebted to “Rapture”-era Blondie and Studio 54.

“Creature Comforts”, meanwhile, is sparkling ’80s electronic pop that recalls The Human League and OMD at their most grandiose. With its Oberheim Two Voice synth sweeps, crisp beats and Régine Chassagne’s helium backing vocals, it’s a deceptively danceable anthem for the death-fixated, fame-hungry iGeneration, and a totem of the LP’s ability to successfully fuse euphoric sounds and downbeat words.

The LP is bookended by two slow, brief alternate versions of “Everything Now”, the supple, groove-based, Talking Heads-heavy single that gives the album its title and extends its core theme of the dangers and intoxicating pleasures of perpetual over-stimulation. “Every single room in my house is full of shit I couldn’t live without,” sings Butler, as the gospel vocals soar and the propulsive bassline pushes him on. This age of excessive choice is crudely atomised on “Infinite Content” – “infinitely content!” – which appears in two radically different versions midway through the album. One is punky and urgent, a rage against consumerism. The other is sweet and dreamy, borne on a drifting summer breeze, as though all involved have been narcoticised by sensory overload.

While “Signs Of Life” portrays hedonism as a search for existential meaning, elsewhere the quest leads to even greater extremes. On “Creature Comforts”, the protagonist “dreams about dying all the time/Told me she came so close/Filled up the bathtub and put on our first record.” The same disquieting scene is explicitly revisited later, on “Good God Damn”. “Put your favourite record on, baby, and fill the bathtub up/You want to say goodbye to your oldest friends.” By the second telling, it feels disturbingly like real life.

And still the music glistens and gleams, which is, presumably, partly the point. Arcade Fire save the most downbeat musical moments on Everything Now for exploring intimate terrain. “Put Your Money On Me” possesses the melancholic grandeur of late-period Abba, though the lyrics are closer to Rumours-era Fleetwood Mac in their uncomfortably high-def account of one party’s undying devotion in the teeth of a disintegrating relationship.

The closing “We Don’t Deserve Love”, meanwhile, is a warped hyper-ballad. The singer drives home from a time spent “hiding my scars in broad daylight bars/Behind laugh tracks on TV”, in the knowledge that everything has changed. “Keep both eyes on the road tonight,” Butler counsels, wearily. It’s the place where all the epic melancholy and confusion of Everything Now comes home to roost, the last lap of an intoxicating ride.

Q&A
Win Butler
Reflektor was influenced by Haiti; what places made their mark this time?
New Orleans has a huge influence on the overall atmosphere the record was created in. It was mixed in the middle of carnival season, with Mardi Gras raging around us. Things were so crazy in the US politically, but New Orleans seems to exist out of time. You can feel all the trauma the city has survived, and it made it feel like the current crisis we face is possible to overcome.

What were the primary musical inspirations?
It felt like a similar soup to early punk and new wave movements in London and New York in the late ’70s, where punk kids were going to discos in Manhattan and hanging at dance halls in London. In Montreal, there’s a fascinating mix of French, African and Haitian cultures, and in New Orleans it’s hip-hop, brass music and jazz. We tried to find our own musical language for this very modern moment, where all genre and sense of clique has been evaporated.
INTERVIEW: GRAEME THOMSON