“Sometimes you gotta go get mad!” The full gang reconvene in Baltimore for a feral but friendly ninth... 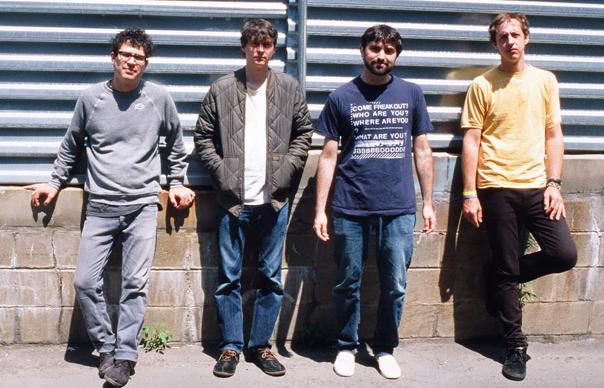 “Sometimes you gotta go get mad!” The full gang reconvene in Baltimore for a feral but friendly ninth…

Animal Collective are a group enamoured by the process of their own evolution, reliable only in the sense that every one of their records is reliably different. As with Charles Darwin’s theory, there’s no predestination here, no clear end in mind. Rather, this unassuming bunch of Baltimore nature kids have always made a point of adapting to their environment – whatever or wherever that might be.

The last five years alone have witnessed a bewildering catalogue of mutations. Deprived of guitarist Josh Dibb following the sickly-sweet psych-outs of 2007’s Strawberry Jam, Animal Collective ditched freak-folk for electronics and samplers and made the rave-flecked Merriweather Post Pavilion, a sewing together of dreamy textures, aquatic reverb and Noah ‘Panda Bear’ Lennox’s tumbling Beach Boys harmonies that played a hand in inventing ‘chillwave’, cracked the Billboard Top 20 and would be voted Uncut’s 2009 Album Of The Year. Then, capitalising on a friendship with director Danny Perez, they made an daringly uncommercial follow-up – “visual album” ODDSAC, a retina-scorching blend of Kenneth Anger surrealism, B-movie gore and cream-cake food fights with a gooey, psychedelic soundtrack to match.

Now, another shift. Bristly and urgent, red in tooth and claw, the songs on their ninth album recall wilder, more chaotic earlier outings such as 2003’s Here Comes The Indian or 2005’s Feels. With its mix of rattling percussion and mangled electronics, “Monkey Riches” sounds part deranged drum-circle, part soundtrack to some lost Donkey Kong platformer, while the jittery Tropicalia of “Today’s Supernatura” romps around with hackles up, Dave ‘Avey Tare’ Portner bawling: “Sometimes it won’t come so easy/Sometimes you’ve gotta go get maaaad!”

But Centipede Hz is a more confident and elaborate piece than such primitive outings, a sign of a band more at ease with its protean nature. It works from an unusual mood board. Dave ‘Avey Tare’ Portner describes it as “less aquatic than some of our earlier records… it’s more rocks and angles”. HP Lovecraft and pulp sci-fi novels were amongst the inspirations, and to get into the right headspace, the band imagined music escaping our planet in the form of radio waves, finding their way to distant worlds to be heard and interpreted by alien ears. This idea works both figuratively – if George Lucas wanted to further update Star Wars, one could easily imagine hyperactive, hyper-melodic sing-songs like “Applesauce” and “Father Time” issuing from a back room at the Mos Eisley Cantina – and also more literally: the songs themselves are laced with snippets of old radio broadcasts, adverts and idents warped and fuzzed out and crammed in the cracks like stuffing.

This new vitality is explicable. Whereas albums back to Strawberry Jam have been pieced together remotely, parts bounced back and forth via email, Centipede Hz was born out of three months of intense jamming in in the group’s native Baltimore, Lennox sat down behind a drum kit for the first time since Feels. At times it is a bit of a racket: the opening “Moonjock”, with its crashing carnival drums and curdled group choruses, may weed out the fair-weather sorts enticed by Merriweather’s cool lagoons of sound.

Still, for all their renewed energy, Animal Collective now work with a certain restraint. Despite its uncanny material – all distorted drums, creaky-gate melodies, and bursts of unchecked electricity – “New Town Burnout” is balladic and beautiful, a tale of homecoming and hard-found catharsis. Similarly exceptional is “Wide Eyed”. Marking Josh ‘Deakin’ Dibb’s debut lead vocal with the band, it chains strobing synths and spasmodic, tumbling drums into a wistful, Flaming Lips-like spiritual: “What’s the change for the better,” ponders Dibb, “For a child who learns not to cry?”

Key to Centipede Hz’s success, one suspects, is the presence of producer Ben Allen. A former engineer for P Diddy’s Bad Boy Records and producer for Gnarls Barkley, Allen was originally credited for bringing Merriweather’s pneumatic low-end. Here, though, his job is different; rhythms are kept crisp, and the chaos is tightly corralled so songs shine through.

The result sounds a far cry from chillwave’s soft, gauzy textures; possessed of a strange beauty, hard and bright, and probably unlikely to elicit the broad appeal that was granted to Merriweather. Centipede Hz is an album that both gazes up into the cosmos, and stares down into the dirt – and perhaps that’s not so weird. “I’m going hiking/Are you coming hiking?” proffers Portner on the album’s closer, “Amainta”. Because that is where Animal Collective find themselves: forever on the move, over grass and under stars.
Louis Pattison

Q+A
Animal Collective
You recorded Centipede Hz back in your native Baltimore…
Josh: My mother runs a spiritual community – there was a building like an old barn from the 19th century, like falling apart, and they had to tear it down. We just put up an basic a-frame on the same footprint… it’s like a workshop.
Brian: We thought it might be too small at first – we probably had less square footage than this room to set up and play. But it was nice to play that close to one another.
Noah: It was loud. Very loud.

It sounds like the wild feel of some of your early material has leaked back in…
Brian Weitz: At the end of touring Merriweather, we did this DJ set at David Holmes’ bar in Belfast. It was nothing serious, just ‘Do you guys wanna come by the bar and bring your iPods?’, so we had no expectations. We didn’t play techno or dance music – it was all rock music, psych… There was probably a lot of Can, Selda, because one of our friends was really into Turkish psych. I played “Autumn Almanac” by the Kinks and people went nuts – it felt like we couldn’t do anything wrong! One group of people came up and kept requesting Faust, and everyone was dancing but to this weird rock music. It became this really sweaty dance party – we wanted that really sweaty, high energy feel.
INTERVIEW: LOUIS PATTISON