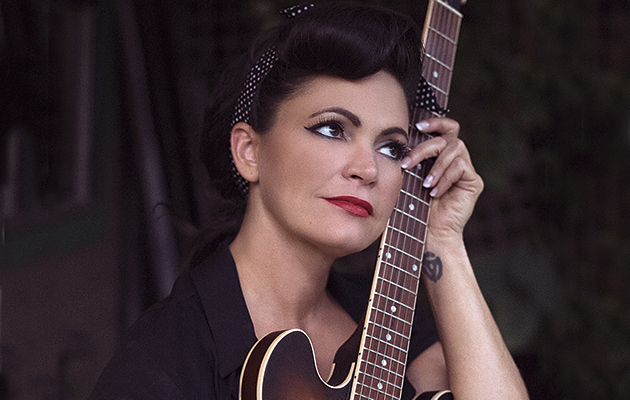 The day after Donald Trump’s inauguration, Angaleena Presley tweeted a picture of herself at the Women’s March on Washington, brandishing a placard that read: My body, my business / Southern women for civil rights. It was one of the few public stands taken by a mainstream country artist against a president borne to power on the disaffection of their own red state heartlands, but Presley’s career has been defined by her ability to take on social issues with anger and nuance. As one-third of Pistol Annies with Miranda Lambert and Ashley Monroe, she crafted vignettes of rural poverty with a deceptively light touch, and she dug her nails deeper into the subject on her own solo debut, 2014’s American Middle Class, singing about towns hollowed out by addiction and a coal miner father who never crossed the picket line.

Presley’s righteous fury and mordant wit burn even brighter on its follow-up, Wrangled. It opens with a savage deconstruction of every “inspirational” power ballad that’s encouraged young artists to follow their dreams. Drenched in pedal steel, “Dreams Don’t Come True” offers only hopelessness and regret as Presley bluntly narrates how that worked out for her: “I thought I’d make hit records and get hooked on drugs; I wound up pregnant, strung out on love.” It’s a reference to her own path as a “10-year overnight sensation”, a former Wal-Mart cashier and single mother who blossomed late, releasing American Middle Class a month after she turned 37; and on the explicitly feminist Wrangled, Presley elegantly ties her experience of struggling against a male-dominated industry in the era of beer-swilling, brain-deadening bro-country into the wider binds placed on women by conservative mores.

“High School” empathetically delineates how suffocating gender roles are imposed early on both girls and boys, while the album’s title track is both slow-burning centrepiece and slow-dawning realisation: “The Bible says a women oughtta know her place / Mine’s out here in the middle of all this wide open space.” Her subsequent joy at busting out of these strictures is in full flow on the rollicking, wholly unrepentant “Mama I Tried” and booze-swilling “Motel Bible”, which finds her opting for “holy spirits” over anything you’d find in church.

Presley’s unshowy lilt is a naturally tender instrument, but she relishes using it for snappier, sarcastic purposes too – “If you bless my heart, I’ll slap your face,” she pouts winningly at one point. Elsewhere, two inspired collaborations making for Wrangled’s most ambitious moments: the irresistible rockabilly of Wanda Jackson co-write “Good Girl Down” and the audacious, distorted stream-of-consciousness “Country”, which culminates in a verse from Alabama rapper Yelawolf that shouts out Sturgill Simpson.