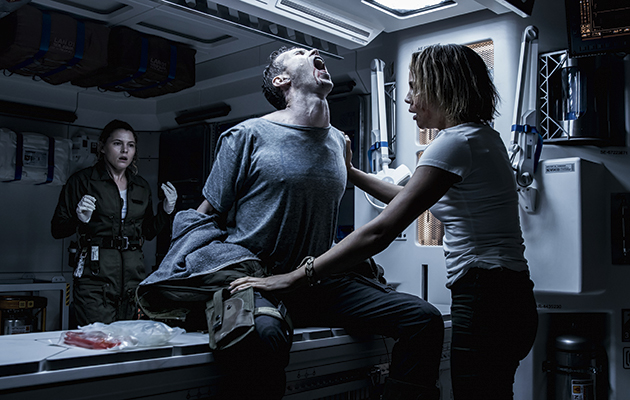 Has there ever been a franchise as badly treated as Alien? A slow decline that reached a trough with two (two!) crossovers with the Predator series; could even a hardy xenomorph with acid for blood survive that, one wondered? Ridley Scott’s return to the series, to direct the prequel Prometheus, was a mixed blessing. Scott’s 1979 original still stands up as a terrifically tight, claustrophobic shocker. But Scott’s filmography since is frequently patchy; he is prone to privileging visuals over narrative. And – as if often the case with big budget sci-fi movies nowadays – Prometheus was muddled, quasi-mystical, po-faced, nowhere near as lean or mean as its late Seventies’ ancestor.

Prometheus was a kind of grandiose creation myth that essentially recycled von Däniken’s hoary ideas from Chariots Of The Gods. This follow-up at least draws from a more diverse pool of influences. Frankenstein fans will note the sci-fi equivalent of a mad scientist living in a remote castle – while allusions to the works of Piero della Francesco and Michelangelo become, in their own ways, critical plot points. The aesthetic is a bit Bosch with the Chapman brothers’ Hell thrown in.

The Covenant is a colonists ship transporting couples – multiple Adams and Eves, if you like – to a new home among the stars. Prematurely awakened from artificial hibernation, they receive a transmission from a nearby planet. Among the cast are Katherine Waterston, Danny McBride, James Franco and Billy Crudup, as well as Michael Fassbender, here playing two androids. Inevitably, watching Fassbender out-Fassbender himself provides a welcome distraction while we wait for the Xenomorphs to arrive and chew up the cast.

Alien: Covenant knowingly replays many of the greatest hits of the original film (and, to an extent, James Cameron’s sequel), albeit with some tweaks here and there. You remember the chest-burster; how about a back-buster? But these suggest a creative inertia for the series; merely playing to Alien’s strengths rather than pushing forward. It is a better film than Prometheus, at least. Though as is common with all the series’ sequels and prequels, it lacks freaky, dystopian spirit of Scott’s original.