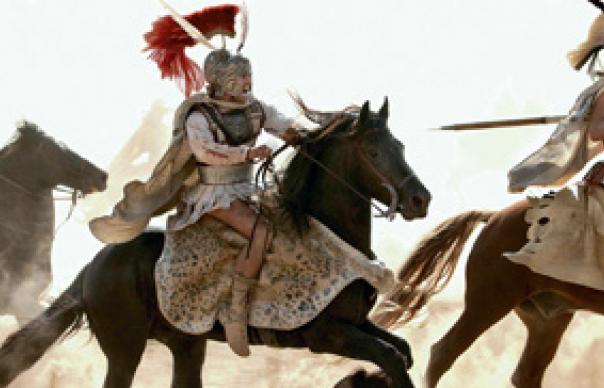 At one stage, Oliver Stone, Baz Luhrmann and Martin Scorsese were all prepping movies about Alexander – the Macedonian leader who united Greece to overthrow the Persian Empire in 330BC, then conquered Egypt before lunchtime. Why the sudden interest? The success of Gladiator no doubt played a part – and you have to admit, the story of a Western leader subjugating what is now the Middle East and Afghanistan has a certain topical resonance.

No slouch when it comes to war movies, Oliver Stone should have been the right man for the job – but something has gone badly wrong here. Framing the story as the memoir of Ptolemy (Anthony Hopkins), Stone gives us the last thing anyone would have expected: an earnest, scrupulously even-handed $150 million history lesson, chock full of names, dates, facts, notes, cultural references and classical quotations. For a director whose movies are usually energetic, ambitious and exciting, Stone’s biggest crime here is making a film so crushingly unengaging.

The script – co-written by Stone – is long-winded, bogged down by misguided attempts to fathom Alexander’s psychological motivations. Farrell – woefully miscast – is upstaged by a ludicrous blond hairdo which only gets longer as the movie goes on. One of the most charismatic leaders in history comes across as a vainglorious despot with unresolved childhood ‘issues’ – unavoidable, perhaps, if your scheming mother (Angelina Jolie) has a sub-Transylvanian accent and a fondness for sleeping with snakes, and your father (Val Kilmer) is a one-eyed drunk.

Thankfully, the film’s academic sensibility doesn’t preclude such genre staples as crunchy battle scenes, dodgy symbolism, raunchy toga parties and hammy British thesps. Certainly, Stone can direct a battle sequence, and it’s when he unleashes the elephants that the movie finally gets exciting. But Stone is weighed down by the gravity of all this history. When, against all advice, Alexander inexplicably marries an Afghan tribal princess (Rosario Dawson), Professor Ptolemy dutifully lists three theories as to what on earth was going on in the royal head. Since when did movie-makers do multiple choice? Discuss.