Limited-edition tribute to a groundbreaking bandleader 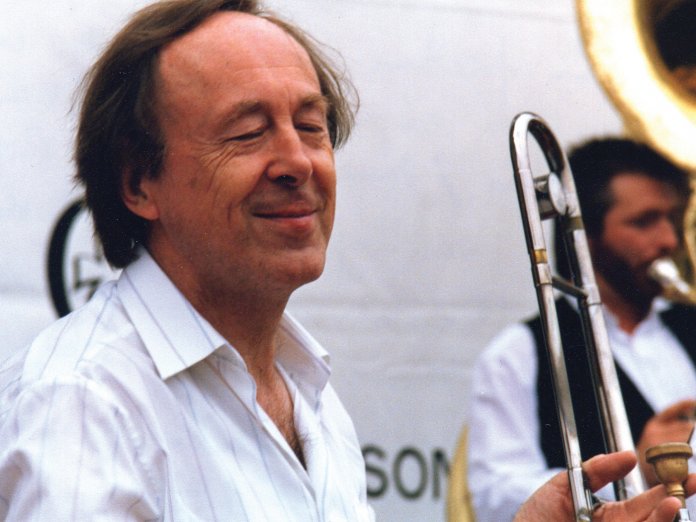 By any yardstick, Chris Barber was one of the most influential figures in 20th-century British popular music. His death in March, just before his 91st birthday, inspired tributes to a man whose instincts and enthusiasms helped lay the foundations for just about everything that happened in the 1960s and beyond. This set of four CDs, meticulously compiled and copiously annotated by Alyn Shipton, handsomely illustrated and limited to 1,000 copies, presents an unanswerable and probably definitive case for his significance.

Barber played trombone, but that was the least important of his accomplishments. A natural-born bandleader, he was an encourager, a facilitator, an enabler. The 69 tracks making up A Trailblazer’s Legacy, ranging over his entire career, demonstrate the breadth of his interests, his inclusive approach to making music, and his knack of playing a part in events that would later be seen as historic.

The Hertfordshire-born son of left-leaning parents – an insurance statistician and a headmistress – arrived on the British jazz scene just after the start of the New Orleans revival, forming his first amateur band in the late 1940s. While recording an album in 1954, Barber included a track reflecting his habit of presenting a short set of skiffle songs as an interlude in a club or concert appearance. Rock Island Line featured the singing of the band’s banjo and guitar player, Lonnie Donegan, with Barber on bass and Beryl Bryden on washboard. Released as a single under Donegan’s name, it fired the imagination and reshaped the thinking of an entire generation.

Soon Barber would be risking the wrath of Britain’s traditional jazz purists with such heresies as expanding his band’s repertoire to include compositions by Duke Ellington, inviting the Jamaican saxophonists Bertie King and Joe Harriott to make guest appearances, persuading the Musicians’ Union to let him bring Muddy Waters, Sister Rosetta Tharpe and the duo of Sonny Terry and Brownie McGhee over to make their first UK appearances, and recording with a host of other American musicians, mostly with a New Orleans background, such as the veteran clarinetist Edmond Hall and the singer-pianists Eddie Bo and Dr John. All except Waters are represented here, along with other distinguished guests including Louis Jordan and Van Morrison.

What Barber understood was that jazz was never a purist’s music, and therein lay its
special quality. The only purity it needed was an authentic feeling for its core components:
the rhythm, the blues, and the directness of emotional expression in evidence at all the many thousands of performances in which, over the course of more than 60 years, he shared his unquenchable enthusiasm. Long before the invention of postmodernism, Barber and several generations of skilled sidemen were persuading audiences to see the music’s many strands as threads of a single cloth.