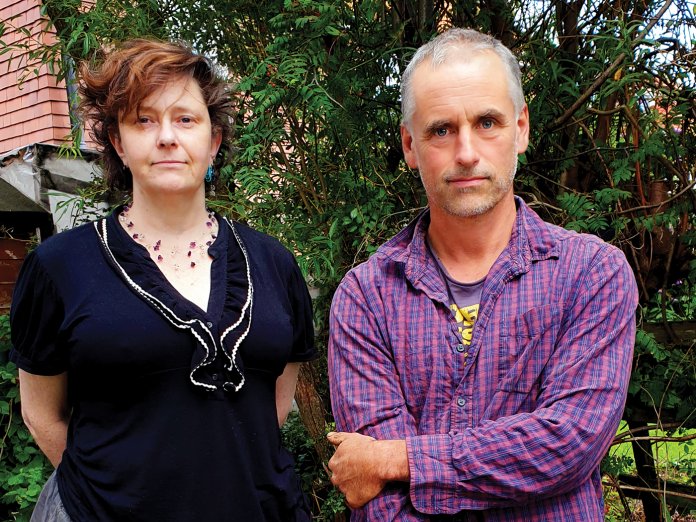 The American art of Sacred Harp singing has spread far and wide since its inception in New England two centuries ago. And as societies continue to sprout across Canada, Australia, mainland Europe and the UK, the tradition has been vigorously upheld in the north-east of England by Cath & Phil Tyler. Prior to lockdown, the couple hosted a popular weekly night in Newcastle, while Cath is a Sacred Harp teacher of some repute.

In simplistic terms, Sacred Harp singing is designed as a social experience rather than for an audience, using shape notes for ease of learning and rooted in four-part harmony hymns. There’s often something thrillingly elemental in its discharge, as befits the naked origins of the term itself (sacred harp refers to the human voice).

This is just one facet of the Tylers’ music. Their interpretations of traditional song – drawn from both the US and Britain, often inviting a confluence of both – strip the source material to its core components, usually just voice and either banjo, acoustic guitar or fiddle. It’s an approach that’s sustained them for over 15 years now, in the form of live performances, collaborations and bare-bones studio albums. Prior to them tying the knot in 2003, Cath was once a member of shape-singing quartet Northampton Harmony in her native US, plus folk-punk outfit Cordelia’s Dad, who listed Steve Albini among their producers. Multi-instrumentalist Phil, meanwhile, has long been a mainstay of the Tyneside scene in bands like Spraydog and, most recently, slowcore trio Bad Amputee.

Some Heavy Hand is a riveting set that spans Cath & Phil Tyler’s career thus far, a refuge for waifs and strays that either didn’t make it onto their official albums or were cut for little-heard compilations. Palms Of Victory and Amazing Grace both date from their first ever recording session, at Brancepeth Castle in County Durham, in 2005. The former, a Methodist hymn once covered by The Carter Family, Bob Dylan and others, is a rousing plea for deliverance; the latter forgoes its customary feelgood zip for something altogether more sombre and considered.

Originally done for Oak Ash Thorn, 2011’s Peter Bellamy tribute, Our Fathers Of Old is a stirring a cappella take on the Rudyard Kipling poem that skewers arrogant folly through the ages, each generation seemingly consigned to repeating the same mistakes. Life is rarely less than an endurance trial in these songs, be it the narrator of Warfare (gleaned from EC Ball’s version, here served by Cath’s pure, strident tones over stroked banjo) or the weary protagonist of The Water Is Wide, broken by love’s false promise.

As stark as it is beautiful, Some Heavy Hand is a fine entry point for those yet to discover this beguiling duo.