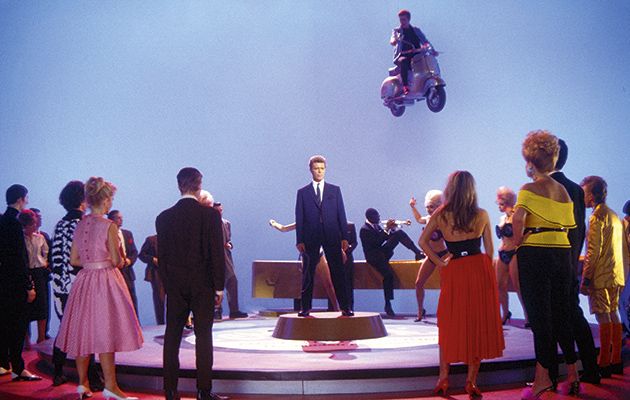 They don’t make British films like this any more – for that matter, they never really did in the first place. Julien Temple’s hymn to Soho society and Britain’s late-50s discovery of teen culture has gone down in official film history as one of the misguided follies of the 1980s. Yet, 30 years after release and at a far remove from the hype-fuelled expectation that preceded it, Absolute Beginners can be judged more dispassionately. Yes, it’s a patchy, overstretched, sometimes cumbersome attempt to cram three decades of British pop culture into one brashly gilded frame. Even so, it stands up today as a wonderfully exuberant gesture – crazily quixotic, perhaps, but brimming with cheek, brains and exuberance.

Ostensibly, the film is an adaptation of Colin Macinnes’s 1959 novel about being young in a London that was shrugging off the heavy overcoat of post-war British austerity. In reality, Temple imagined the movie as several other things. It’s a knowingly anachronistic celebration of British jazz culture, of a sort that had acquired a modishly revisionist new lease of life in UK 80s pop. It’s a psychogeography of a lost London, from Piccadilly to the crumbling Notting Hill famously photographed by Roger Mayne. And it’s a snapshot gallery of English eccentrics, hence cameos from veterans Irene Handl and Eric Sykes and a role for Mandy Rice-Davies, a star player in the 1961 Profumo sex scandal.

The main narrative thread – the amours of photographer Eddie and party girl Crepe Suzette – remains frayed, not least because of the clunkiness of the ingenu leads, Eddie O’Connell and Patsy Kensit. He’s personable but wooden – and lumbered with a dire voice-over narration – while she’s largely reduced to oohing, in her dance sequences she carries off the ‘Brit Bardot’ routine with some aplomb. It’s the character parts that bring the energy, and give novelty casting a good name. DJ Alan Freeman parodies himself, Lionel Blair is silkily preposterous as a thinly-disguised version of Tin Pan Alley supremo Larry Parnes, and James Fox is elegantly unctuous as a Mayfair couturier.

Then there’s David Bowie, bizarrely playing it like one of Thunderbirds’ Tracy brothers as ad man Vendice Partners; having worked with Temple on the 20-minute “Jazzin’ For Blue Jean” video, he was clearly keen to be even more of a song-and-dance man. His turn on the splashy “Motivation” is musically out of the keeping with the rest – it’s by far the most conspicuously ‘80s number here – but his insouciant hoofing is something to behold (according to Temple, he learned to tap dance in two weeks flat).

Bowie isn’t the show stopper, though. That honour goes to Ray Davies, keeping his quizzical dignity through the typically vaudevillean number “Quiet Life” (shot on a doll’s house set that’s surely inspired by Jerry Lewis’s The Ladies Man). And Sade’s nightclub ballad shows all the regal command of a star who knew she had the 80s at her feet, and the 50s at her back.

Musically, the film punched above its weight by enlisting jazz maestro Gil Evans to oversee its soundtrack – and the bustling arrangement of Charles Mingus’s “Boogie Stop Shuffle”, set to a lengthy, vertiginous tracking shot through Soho by night, makes for one of the great opening sequences in British cinema. The evocation of bygone London – sometimes realistic, sometimes cartoonishly fanciful – is a triumph on the part of production designer John Beard and cinematographer Oliver Stapleton, who piles on clashing shades of neon with rapturous aplomb.

It’s when the film attempts to play it serious that it comes unstuck. The treatment of 1958’s racial clashes in Notting Hill comes across as callow, pitched awkwardly between British B-flick punchiness and a poor man’s West Side Story. For all the film’s political good intentions, there’s something painfully dated about the representation both of gender and race: all the women are birds, tarts or vamps, and apart from Miles-styled trumpeter Mr Cool (the late Tony Hippolyte), whose main function is to be, well, cool, there are no substantial non-white characters at all.

An informative, no-frills new documentary has Temple and collaborators (including the long-lost O’Connell) reminiscing about this singularly challenging venture. You learn a lot about the intricacies of British film production at the time, and the record is set straight about this supposed catastrophe: Absolute Beginners may have been reviled by the UK press, but it performed well at the box office. In the States, it was much admired by Martin Scorsese and, it transpires, Michael Jackson, who used to copy the dance moves with his younger sister, Janet.