Their legendary 1971 performance, now released as a hi-fi source recording 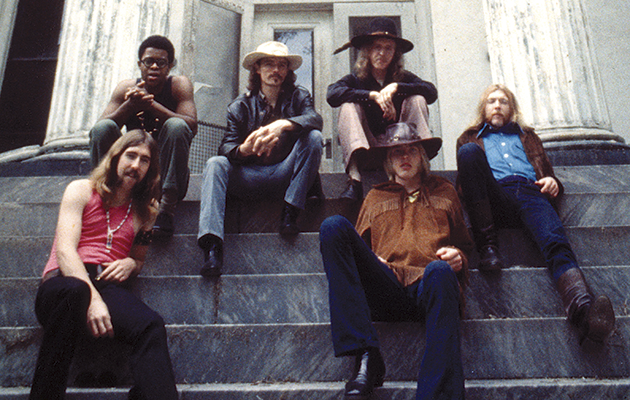 The Allmans became New York City’s adopted house band in 1971, thanks primarily to Bill Graham, who booked them into the Fillmore East whenever possible. On August 26, two months after headlining the venue’s closing weekend and a month after the release of their breakout LP At Fillmore East, the bandmembers set up as they would for a session in the big tracking room of Phil Ramone’s A&R Studios for a live broadcast on free-form New York station WPLJ, with the renowned producer personally recording the set to eight-track tape.

During the 67-minute performance, the road-tested, high-revving band were firing on all six cylinders, emphatically displaying their unique approach, a seamless fusion of tightly structured roadhouse blues and adventurous, musically elevated improvisation at once primal and sophisticated. The Allmans’ instrumental makeup – two guitars, two drum kits, bass and keys – and their ability to launch into epic explorations out of the song framework had been pioneered by the Grateful Dead, but nobody, not even the Dead themselves, could touch this heady, virtuosic crew on the concert stage, as denizens of the Fillmore East had discovered to their mind-blown delight during the previous year and a half.

The broadcast has been heavily booted from compressed off-the-air recordings, triggering endless debates among the fanatics as to whether the A&R Studios performance rivals or trumps the At Fillmore East and closing Fillmore shows. Now, with the first official release of the recording, newly mixed from the multi-tracks, we can finally compare them on a level playing field. Ramone’s sound is tighter and drier than Tom Dowd’s bright, reverberant Fillmore recordings, bringing a greater sense of intimacy to the interaction, and mix engineer Suha Gur has wisely placed Duane Allman and Dickey Betts’ guitars to the left and right channels, respectively, bringing enhanced drama to their enthralling give and take, and inviting headphone geek-outs. Unlike their stage setup, the players arranged themselves in a semicircle, enabling them to closely follow each other’s moves, rendering the interaction even more nuanced. The resulting performance is as close to perfection as the original lineup ever achieved.

Bandleader Duane Allman’s setlist for the broadcast mirrored what The ABB played in their live performances throughout 1971, but the climactic “Whipping Post”, which stretched to 23 minutes on At Fillmore East, was dropped because of time restraints. You can sense the players warming up their musical muscles on the standard set opener, Blind Willie McTell’s “Statesboro Blues”, before kicking into gear on Muddy Waters’ “Trouble No More”, with its strutting groove and howling dual slides, which leads into a taut and fiery take on Gregg Allman’s “Don’t Keep Me Wonderin’”.

In the Layla-like money solo that propels the number to its wild-ass payoff, Duane pulls back hard against the beat as if he had stick-um on his Coricidin bottleneck, and the band slows the groove right in sync. Here you get the distinct sense, which continues through the rest of the performance, that Duane is conducting the band with his Les Paul and his body language. Gregg switches from B3 to piano on Elmore James’ “Trouble No More”, the combination of his barrelhouse plinking and the second-line groove transporting the song from Chicago to New Orleans. The guitar interplay is especially delectable on a scalding run-through of the James-penned “One Way Out”, as Betts progressively jacks up the establishing riff while Duane darts in and out like an agitated wasp.

At this point, the band further ups the ante. Berry Oakley provides the glue throughout a sublime take on Betts’ instrumental “In Memory Of Elizabeth Reed” with a percolating bassline that’s mathematically precise, McCartney-like in its melodiousness and deeply funky, as the band seamlessly rolls through the instrumental’s shifts in tone, texture and intensity. For my money, this is the definitive live version of the piece.

Gregg’s vocal and Duane’s slide solo conspire to bring a captivating soulfulness to the T-Bone Walker slow-blues mainstay “Stormy Monday”, deepening the mood at a serendipitous moment, just before Duane steps up to the mic and spontaneously pours his heart out in tribute to R’n’B sax great King Curtis, who’d been stabbed to death in front of his Manhattan apartment two weeks earlier. Duane and his fallen friend had done a lot of session work together, and both had played with Delaney & Bonnie & Friends during a previous WPLJ broadcast.

After raving about Aretha Franklin and Stevie Wonder’s performance of Curtis ’64 classic “Soul Serenade” at the funeral, Duane decides on the spot to do the song and figures out on the spot to combine it with Willie Cobb’s “You Don’t Love Me”, which the Allmans regularly performed, though it hadn’t been part of the night’s setlist. Thus begins a stunning 19-minute musical exorcism during which Duane leads his bandmates through the stages of grief in a medley that stands as one of the most emotionally withering performances of his all-too-brief career. From there, they close the set with a rendition of the band-composed “Hot’ lanta”, reaching a free-jazz-like intensity in an ecstatic expression of release.

The A&R Studios set would be Duane’s final performance in the city where he’d cemented his greatness. Two months later, on October 29, the 24-year-old artist died when he lost control of his Harley back home in Macon, just after cashing his first ever royalty cheque.