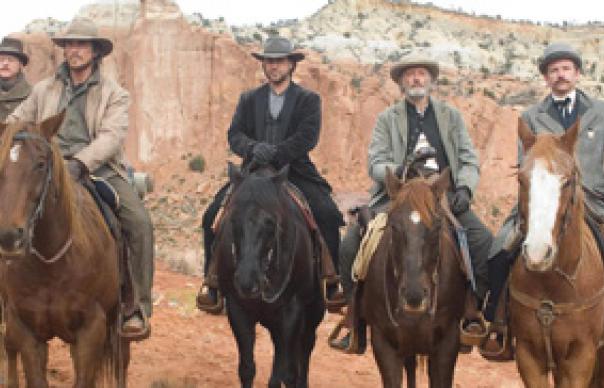 If you have a genre that needs reviving, send for Russell Crowe. Having relaunched the sword’n’sandals epic (Gladiator) and salvaged the seafaring saga (Master And Commander), Crowe now applies his amazing restorative powers to the Western. {b]Walk The Line director James Mangold nearly cast Tom Cruise and Eric Bana, but Cruise dropped out and Crowe galloped to the rescue. His vote helped bring Christian Bale aboard as struggling rancher Dan Evans, which has lifted the movie, based on an Elmore Leonard story, from the merely fine towards the exceptional.

Delmer Daves’ original 1957 version is renowned for its smouldering tension and powerful cinematography, but Mangold’s view is richer and broader, evoking echoes of Once Upon A Time In The West. Bale’s Evans, semi-crippled with a Civil War leg injury, struggles to work his Arizona ranch and feed his family. With his wife unhappy and his son viewing him with contempt, Dan is shrinking into a ghost of his former self.

When Ben Wade (Crowe) is arrested following a spectacularly ruthless raid on a payroll wagon (his 22nd robbery, we learn), a Pinkerton detective plans to transport him to the nearest railway station to despatch him to Yuma prison. Wade’s gang of unwashed desperadoes, corralled by smiling-psycho Charlie Prince (Ben Foster), lay rescue plans, and the ’tec is forced to hire help. Evans signs up, because he needs the $200 fee.

With the remorselessness of Greek tragedy, Evans becomes the last man standing between Wade and his compadres as his co-workers die or chicken out, but any notion of Evans as a chisel-jawed hero driven by moral duty is severely compromised by circumstances. Having taken the Pinkerton shilling, he finds himself aligned with his tormentors – Southern Pacific railroaders who want his land –and they’re joined by black-hearted bounty hunter Byron McElroy (Peter Fonda), a slaughterer of unarmed Indian women and children.

Wade embodies the contradictions of a world in which it’s impossible to tell the righteous from the scumbags. When not killing and stealing, he enjoys quoting the Bible, dropping philosophical aphorisms or making sensitive drawings of the female form. He arouses Evans’ jealousy by flirting with his wife (she admiring Wade’s unapologetic independence in contrast to her husband’s sorry self-loathing), but it’s Wade who most clearly discerns Evans’ inner qualities. The ever-improving Bale matches Crowe scene for scene, and his portrayal of a proud man devising the only possible escape from his sea of troubles is genuinely moving.