Fans around the world pay tribute to Lennon 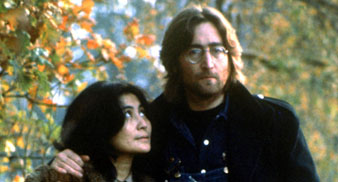 In the interview, Ono said that she could never leave the couple’s New York home, the Dakota, despite her husband being fatally shot there by Mark Chapman on December 8, 1980.

“It is the home John and I created together. Every wall witnessed John,” Ono said. “It is the only home Sean [Lennon, the couple’s son] knows to be ours. How could we leave?”

Ono also said that, were he still alive today, she thinks Lennon “would definitely be experimenting on some new music, using the computer”. She added: “I am sure it would be quite something.”

Read the full interview in this week’s issue of NME, which is available on UK newsstands and digitally worldwide now

Meanwhile, Ono has also paid tribute to Lennon with a blog on Imaginepeace.com.

“This year would have been the 70th birthday year for John if only he was here,” she wrote. “But people are not questioning if he is here or not. They just love him and are keeping him alive with their love.”

She added: “They say teenagers laugh with a drop of a hat. But nowadays I see many teenagers angry and sad at each other. John and I were hardly teenagers. But my memory of us is that we were a couple who laughed.”

In Lennon‘s hometown of Liverpool, local musicians are expected to lead a candle-lit vigil in Chavasse Park at the European peace monument today, reports The Guardian. The monument was dedicated to Lennon on October 9, which would have been his 70th birthday.