Uncut.co.uk has 3 sets of the HBO series to giveaway! Plus winners of 1-3 revealed... 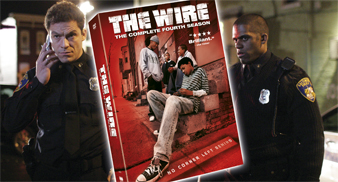 Uncut.co.uk has got three copies of The Wire – Season Four to giveaway!

Coinciding with it’s UK release on March 10, catch-up with best cop drama on TV — for a in-depth review of this penultimate season, see the April issue of Uncut, on sale now.

Season Five of the HBO drama is set to screen in the UK on the FX channel in late Spring/early Summer.

For your chance to win one of three copies of Season Four, simply answer the question by CLICKING HERE NOW for the competition question.

The Wire – Season Four competition closes on March 27. Winners will be notified by email/phone, so please include your daytime contact details.


***Meanwhile, here are the winners of a previous Uncut.co.uk competition to win The Wire seasons 1-3 plus a copy of the recently released Nonesuch records soundtrack The Wire: “…and all the pieces matter.” – Five Years Of Music From The Wire.

We asked, One of The Wire’s most intriguing characters is Omar, what’s his surname?
The answer was: Little.

Check out the official website of The Wire here: www.hbo.com/thewire