From Led Zeppelin 1 to Coda: we're giving them all away! 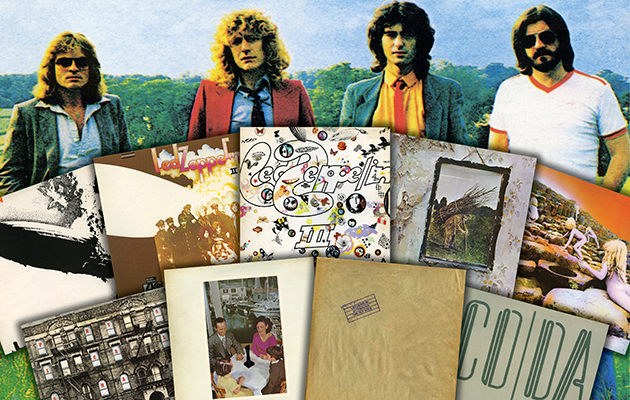 This Friday [July 31, 2015], Led Zeppelin finish their reissue programme by releasing their final three studio albums: Presence, In Through the Out Door and Coda.

It marks the end of mammoth undertaking for Jimmy Page, who’s overseen these reissues.

Meanwhile, we review these final three reissues in the new issue of Uncut, which is in UK shops now.

To the competition! We have one set of all nine albums to give away as prizes. These are the deluxe vinyl editions, with the companion discs containing a wealth of unheard extras.

Like, for instance, the unreleased “Sugar Mama“, recorded in 1968 at Olympic Studios, which features on the companion disc of Coda.

To be in with a chance of winning, just tell us the correct answer to this question:

What is the name of the opening track on Led Zeppelin 1?

Send your entries to UncutComp@timeinc.com by noon, Friday, August 7, 2015. Please include your full name, address and a contact telephone number.

A winner will be chosen by the Uncut team from the correct entries. The editor’s decision is final.

Launching the final wave of reissues at a press conference in the former Olympic Studios in Barnes, west London, Page officially closed the Zeppelin vault.

“As far as the studio side of things [goes], this is it,” said Page. “Unless something might pop up on international Record [Store] Day or something like that. But it will be a long way off.”

Additionally, Page expressed his satisfaction with the reissue campaign, saying, “As far as I’m concerned, I’ve done my job.”

He also discussed the amount of unofficially released live Zeppelin material, noting that with the substantial number of bootlegs in circulation, it seemed unlikely he would pursue a live project on the scale of the studio reissues.

“Looking at the whole bootleg scene and knowing how much live material had already come out, and pretty good stuff at that, dealing with the studio outtakes seemed to be a more satisfying project,” he said. “I knew the chronology and the quality of what was going to turn up so I could really visualize it a lot easier than all the [live] bootlegs that are out there. This is what needed to be done – the whole Led Zeppelin world in the studio needed to be dealt with properly and seriously.”

Asked what he’ll be doing now the reissue series is completed, Page said: “I won’t take it easy. I’ll be working on the guitar now, because that’s the next thing to be obsessive about.”