T.Rex’s classic album, The Slider, is 40 years old this year. And what better way to celebrate such an auspicious anniversary that with a definitive limited edition box set, packed full of extra material? 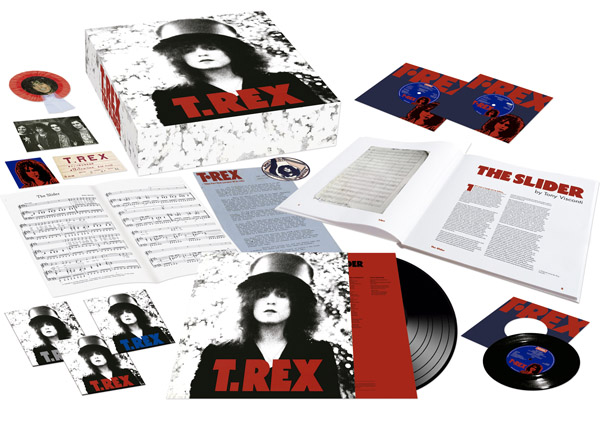 T.Rex’s classic album, The Slider, is 40 years old this year. And what better way to celebrate such an auspicious anniversary that with a definitive limited edition box set, packed full of extra material?

The box set includes 2 CDs (including a remastered version of the original album by producer Tony Visconti), a DVD featuring a documentary on the making of the album as well as assorted TV appearances, a 180 gramm vinyl copy of the album and three 7” singles. As if that wasn’t enough, there’s also a 48-page hardback book including essays, photos and rare archive material, and a second, 40 page book of sheet music for the album. Rounding off the package, there’s also a bunch of replica Slider memorabilia – a poster, a sticker, Marc Bolan fan club letter, concert ticket, sew-on patch and a rosette.

We’re delighted to have ONE box set to give away.

All you need to do to be in with a chance of winning a copy of T.Rex – The Slider 40th Anniversary Box Set is answer this question correctly:

What was the first single to be released from The Slider?

Was it: a) Metal Guru, b) Telegram Sam or c) Chariot Choogle?

Send your answers to uncutaudiencewith@ipcmedia.com by 12pm GMT on Monday, November 29.

One winner will be chosen at random from the correct answers by the editor.