Iowa country bluesman leaves the farm to perform this April 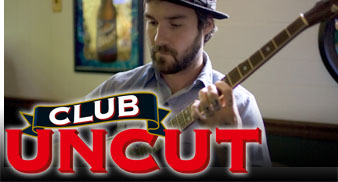 Iowa bluesman William Elliot Whitmore is to headline Club Uncut on April 15, it has just been confirmed.

Growing up listening to Leadbelly, Hank Williams and Doc Watson, and later discovering Public Enemy and Bad Religion, Whitmore sees no difference between hip-hop and the blues. Both “conveying a sentiment with words in a poetic way.”

Whitmore’s will most likely be performing tracks from his new album ‘Animals & The Dark’ his most obviously political record, nailing George W Bush in the opening “Mutiny”. The riotous chorus of “burn, motherfucker burn” is a clue to why he has found common cause with The Pogues.

Club Uncut takes place at the usual venue of the Borderline, Manette Street, London. Tickets are £8, available from www.seetickets.co.uk

Sadly, however, March’s show headlined by Arbouretum has now been cancelled, along with the band’s entire European jaunt. More positively, we’ll soon have news of the excellent bills for the Uncut stage at Brighton’s Great Escape festival (May 14-16). As ever, keep an eye on uncut.co.uk for details.