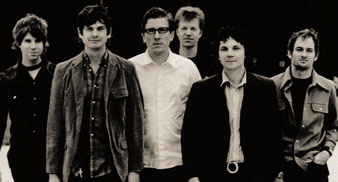 Wilco’s Jeff Tweedy has defended his actions during an incident at the band’s show on Monday October 16 at the Shrine Mosque in Springfield, Missouri, when Tweedy punched a male fan who had jumped on stage and grabbed him from behind.

In a post on the band’s website, they explain that they had felt uncomfortable throughout the concert because of lax security that had already seen fans getting on stage and interrupting the show on two earlier occasions.

“I wish it had gone another way,” Tweedy says on wilcoworld.net. “And I suspect had I felt safer on that stage, had security been doing a better job all night long, well, things would have gone differently. He approached me from behind and I reacted in defence to get him away. I didn’t know what his intentions were, and I had to get him off me. I’m sad that it happened at all.”

Following the incident, tweedy told the Springfield crowd: “Here’s the deal. You guys get to stay down there and be nice or we can’t play. It’s scary when people come up when you’re trying to sing your heart out. Seriously, we don’t have to deal with that very often.”