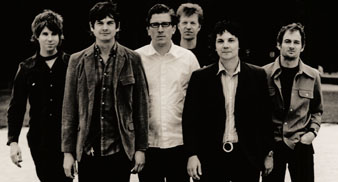 Wilco, on tour in Midwest America, have been showcasing new songs each night.

Wilco fansites including ViaChicago.org have fans split in two camps discussing the new material, with track titles being speculated about, too.

Wilco appear to be steering in a higher-tempo ’70s rock direction, and this is leaving opinion divided.

One forum user, “Wheelco”, says he “won’t criticize anyone else’s opinion, but ‘Rockin” is one term for it; I can think of some others, quite frankly.”

Plagued with troubles, the band were dropped by their record label in 2001 for recording an unsellable album, but went on to win the Grammy in 2004 for Best Alternative album “A Ghost Is Born.”

Jeff Tweedy, Wilco founder member and singer, checked into rehab two years ago and has since been very open about his struggles with migraines, depression and addiction.

One of the new tracks, “Wreck Myself”, features the lyric: “You know a lot other people could be/ standing here instead of me/ singing their own sweet lines/ through clenched and cracking teeth.”

Speaking to The Wichita Eagle, a local Kansas newspaper, ahead of their show there this Sunday (Oct 15), bassist John Stirratt talks about the struggle Tweedy faces.

He says: “Jeff has had different fears about not being sure what removing the problems might do to the songwriting, but ultimately, it’s not worth a great record to suffer.”

Stirratt will be releasing a new album with his side project, “The Autumn Defense”, in January ’07.

Tweedy continues to tour solo, and earlier this year he released the album “Born Again in the USA” with his side project Loose Fur.

Check out the debate on the new Wilco material on the band’s fansite www.viachicago.org.