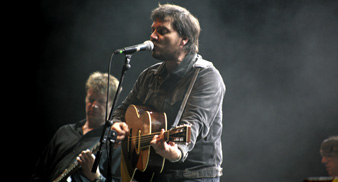 Wilco are offering free downloads of a rare unreleased track in exchange for fans registering to vote in the upcoming US presidential election.

The live version of “I Shall Be Released” is available on their website to all who pledge to vote in the election next Tuesday (November 4).

The band have already begun work on their seventh album, which Jeff Tweedy expects to be released by Spring 2009. The record is due to be a return to the studio-constructed soundscapes of Yankee Hotel Foxtrot and A Ghost is Born, as opposed to the performance-based Sky Blue Sky.

Tweedy, speaking to US publication Rolling Stone says he expects Wilco to “allow ourselves a little bit more leeway in terms of sculpting the sound in the studio and doing overdubs and using the studio as another instrument. Last time around, it was more of a document.”

Guitarist Nels Cline added: “Sonically it’s going to be a much wilder, much more unexpected record. There’s going to be too much to choose from, right now it’s an embarrassment of riches, for sure.”