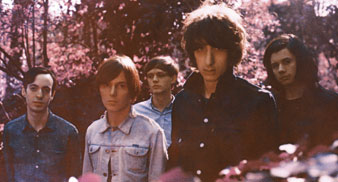 The Horrors have recorded a cover of David Bowie‘s classic single ‘Suffragette City’, scroll down to the bottom of the page and click to watch them perform the track.

The band, who released their third album ‘Skying’ in July, recorded the cover during a session for Channel 4‘s ‘On Track’ in one take. The recording was then pressed straight onto vinyl at London‘s Metropolis Studios.

The Horrors recently announced details of the five UK shows they were forced to reschedule from last month. The band were forced to shelve dates in Edinburgh, Liverpool, Bristol, Oxford and Norwich after frontman Faris Badwan was struck down by a throat infection, but have now rescheduled the shows.