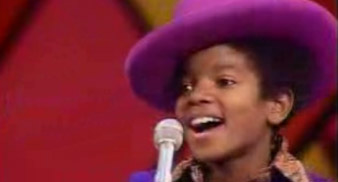 Everyday, we bring you the best thing we’ve seen on YouTube — a great piece of archive footage, a music promo or a clip from one of our favourite movies of TV shows.

Today: Watch a brightly-coloured US TV show that just so happens to feature not only a dapper Stevie Wonder, but also a very young Michael Jackson in a great purple pimp hat performing with his brothers in The Jackson 5.

Filmed and shown in December 1969, an 18-year old Stevie Wonder performs “For Once In My Life”.

Jackson is only 10-years-old in this four-minute clip, and the group sing “I Want You Back.”

As previously reported, Michael Jackson is in London, ahead of his performance at the World Music Awards ceremony tonight at Earl’s Court.

He is to perform a full length seven-minute reconstruction of his 1983 smash hit “Thriller.”