Its all about the Ninja cat 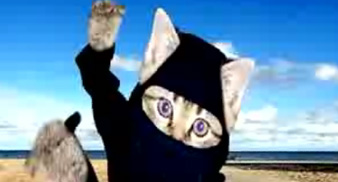 A video for the unsigned band’s track Ninja appears to have been copied by the global fizzy drinks company for a Coca-Cola advert aired in Argentina.

The musical and visual resemblence between the two videos – which feature an animated dancing ninja cat came to light after South American fans of the band emailed 7 Seconds frontman Joel Veitch via the group’s website attaching a link to the commercial.

The band’s video released on websites such as MySpace and YouTube, was created by the 7 Seconds of Love lead singer Joel Veitch, 32, who
earns a living as a freelance animator.

He has previously worked with French and Saunders and on the Big Brother idents.

Although the band has never charted, online they enjoy considerable success, particularly via cult website Rathergood.com – authored by Veitch, which recieves up to 100,000 hits a day and incorporates a forum where the band chat directly with the fans.

The message from the South American fans on the forum is to “Find a lawyer, a good one; someone is becoming rich off your back”.

In response Coca-Cola Argentina have so far said that,”The piece in question was commissioned to a local advertising agency, which assured us that each element was original. Therefore, we are surprised by the alleged claim and deeply regret being associated to this unusual and unexpected debate.”

And then check out Coca-Cola Argentina’s advert here – What do you think??