U2 To Debut First New Album Track At The BRIT Awards

Bono and co. to perform 'Get On Your Boots' at the February ceremony 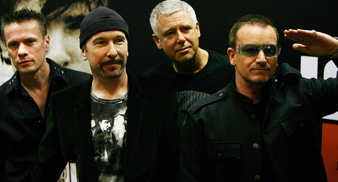 U2 have confirmed that they will premiere the first single from their forthcoming album ‘No Line On The Horizon” live at this year’s BRIT Awards on February 18.

The new album’s first single “Get On Your Boots” will be performed live at the ceremony at London’s Earls Court venue.

Ged Doherty, Chairman of The BRITs Committee said, “We’re thrilled to be able to confirm that U2 have chosen The BRITs for their first global TV performance on their new album. Their addition to the line-up for this year’s show makes it possibly the best we have ever had. This cements The BRITs as one of the biggest TV events in the world.”

U2 have previously won seven BRIT Awards including five for Best International Group awards, Best Live Act and also picked up the Outstanding Contribution to Music Award in 2001.

The nominations for this year’s awards will be announced at the BRITS launch at Camden’s Roundhouse venue on January 20.