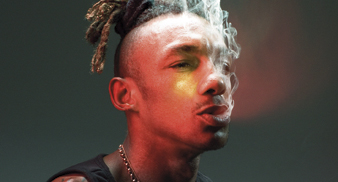 Tricky has spoken out against gun crime in Britain today in the latest, July, issue of Uncut magazine.

The Mercury Prize winner comments in his Uncut interview with Ben Marshall that: “We’re getting more like America everyday”.

Adding, “I love hip hop. But it has to take some responsibility for the gun culture we’ve got over here. We’re getting super-violent. You can walk around the Bronx for days on end and nobody bothers you. In England, you can say the wrong thing in a pub and, before you know it, you’ve got a bottle over your head or a bullet in your brain. English people have got quicker tempers.”

Tricky, real name Adrian Thaws, who has written a song called ‘I Sell Guns’ also goes on to blame the clothes of today’s youth in comparison to the 2-Tone era.

The trip hop singer said: “What have they got to get them through hard times? We had punk rock and ska and bands that made you feel you could do anything. We were into clothes in a big way. Anything to take our minds off the stress. They don’t have to think about getting dressed. They get the baseball cap and trainers on, that’s all it is. But they’ve got nothing to take the pressure off. That’s maybe why they’re more violent than we were. That and the fact they have access to serious artillery. We used to throw stones at each other. Now they shoot bullets at each other. Hip hop has got a lot to do with that.”

To read the full Tricky interview, plus check out interviews with Crosby, Stills, Nash & Young, The Hold Steady, Primal Scream and The Replacements‘ Paul Westerberg amongst others. Get the July issue. On sale in all good newsagents today (May 27, 2008).