Tributes To Tenor Pavarotti Pour In

Elton John, Bono and Sting all pay homage to the singer 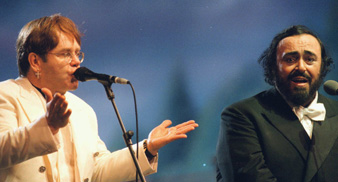 Tributes have been pouring in for opera legend Luciano Pavarotti today (September 6).

As reported earlier, the tenor passed away at home in Modena, Italy, this morning after a year-long battle with pancreatic cancer.

The singer whose career spanned nearly six decades, performed with a multitude of diverse artists from Vanessa Mae to Vanessa Williams.

Amongst the tributes today, on of his collaborator’s on the Warchild humanitarian project U2’s Bono, says how he spoke to the tenor just the other day.

He said: “I spoke to him last week. The voice that was louder than any rock band was a whisper. Still he communicated his love. Full of love.”

Bono also described him as “a great volcano of a man who sang fire, but spilled over with a love of life in all its complexity”.

Pavarotti performed with many rock and pop artists at charity concerts over the years including Elton John (pictured above) who today said it was: “a sad day for music, and a sad day for the world”.

The Police frontman Sting said: “We lost a great friend, a great voice and the world is a smaller place without the big man.”

And Queen guitarist Brian May has said the world was “a sadder place, for the loss of this gentle giant”.

Luiciano Pavarotti was one of only fifteen people to be awarded a Grammy Legend award, as well as holding a Guiness World Record for the number of curtain calls – which was 165.