They're looking forward to sharing a stage with Arcade Fire 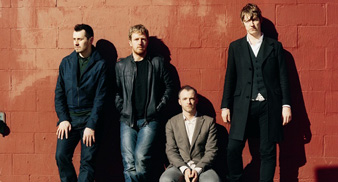 Scottish indie band Travis have expressed their excitement at sharing the stage with some of the greatest bands around at the Californian music festival Coachella festival when they play there for there for first time next Saturday, April 28.

Speaking to Uncut.co.uk, band bassist Dougie said: “It will be nice to be on stage with people like Arcade Fire. We are very excited. We have not played there before and its brilliant playing at festivals with a different setting. It will be really special to play in the middle of the desert.”

Travis will be playing a mixture of old and new songs from their forthcoming album “The Boy With No Name”. Frontman Fran said: “We will do a nice mix. Festivals are great as you don’t have to do the one and a half hour full on set, so it will be very short and sweet.”

With a stellar line-up for this year’s festival, including the newly reformed groups Jesus & Mary Chain, Crowded House and Rage Against The Machine, the band are excited at the prospect at seeing as many of the bands as possible.

Dougie is especially excited at the prospect of seeing The Good, The Bad and the Queen. He said: “I am delighted that I will see Paul Simonon playing the bass! He’s my hero.”