Touareg bluesmen triumph over Grizzly Bear and The Low Anthem 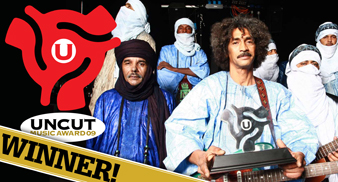 Uncut is proud to announce that Tinariwen have won this year’s coveted Uncut Music Award. They succeed Fleet Foxes, who won the inaugural award for the most inspirational and rewarding album of the year in 2008.

Uncut ‘s Editor and chair of the judges Allan Jones said, “With so much great music to chose from, the judges’ task this year was extremely difficult, but in the end, the panel was unanimous in voting for Imidiwan.

“It’s a fantastically exciting record, full of great, powerful music, passionately and brilliantly played. It had everything the judges were looking for in a potential winner.”

Now in its second year, the Uncut Music Award has already gained a reputation as the most credible award in music. The artists’ nationality, age and sales figures are completely irrelevant as a judging panel of industry figures come together to decide on the winner.

Tinariwen are a band of Touareg musicians from the Sahara Desert region of northern Mali, whose mix of electric blues and Middle Eastern & African traditional drumming, has created a unique sound of their very own. Formed in 1979, they rose to prominence in the 1980s as the musical voice of a new political and social conscience in the southern Sahara. In the early 2000s, Tinariwen started to gain a following outside Africa, first in the world music community and then on the wider rock scene, through frequent tours and appearances at major festivals in Europe and the USA

Ibrahim Ag Alhabib of Tinariwen said of winning the Uncut Music Award: “This makes us really really happy, all of us and I’m glad that this important magazine should recognise our music. It gives us the strength to carry on working and spreading the message about the peace of our desert home, and I’m glad that our music can cross the frontiers and talk to people around the world. Thanks very very much.”

Billy Bragg, meanwhile, said, “I think this band will be hugely influential. In the next couple of years we’ll be hearing young bands lifting the tensions and the rhythms of Tinariwen. You find yourself reaching back to the blues to explain what they do, it’s like they’ve turned the whole bloody thing upside down. I really do think they are an Uncut band.”

BBC’s Creative Head of Music Entertainment Mark Cooper agreed: ‘I love the fact that this is a world music record that saves world music from the liberals. That’s really cool, I think a rock audience can like it, it’s not precious or worthy. It’s real.”

And Bob Harris added, “If we’re talking about what’s the most amazing, creative, forward-looking, political record we’re discussing, then this album is very, very special. There’s a lot of words here, that don’t completely or properly translate into English. There’s so much to discover, to know about this record, but you find yourself asking, ‘How much do I want to know, or how much do I just want to be entranced by it?”

The full shortlist in alphabetical order, was:

To read the full transcript of the judges’ discussions about Tinariwen, visit our Uncut Music Award blog. We’ll post the rest of their comments on the other shortlisted albums over the next few days.