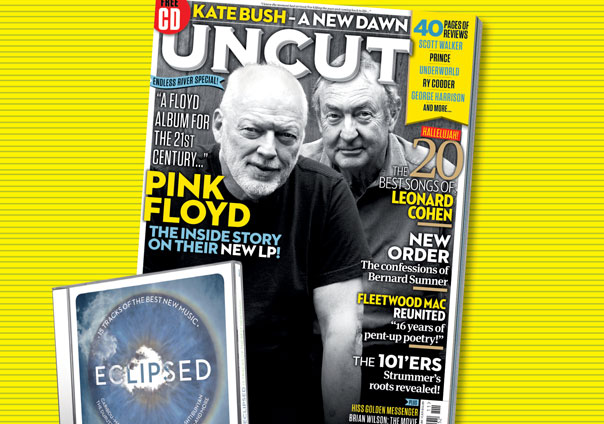 The story of Pink Floyd’s new album, The Endless River, an ambient, instrumental companion piece to 1994’s The Division Bell, is told in our cover feature.

We visit David Gilmour’s houseboat studio, Astoria, and hear from the guitarist, drummer Nick Mason, and producers Phil Manzanera and Youth, who explain how they created this tribute to the group’s late keyboard player Rick Wright.

We also talk to Stevie Nicks about Fleetwood Mac’s live return, and how excited she is to be welcoming Christine McVie back into the fold for the first time since she left the group 16 years ago.

“It’s funny to see it through [McVie’s] eyes,” says Nicks, “her being gone for so long, because she’s so excited.”

Meanwhile, we uncover Joe Strummer’s roots in pub rockers The 101’ers, with help from his former bandmates, and hang out in North Carolina with Hiss Golden Messenger’s MC Taylor to talk folk rock and fatherhood.

The Guess Who recall the making of their US No 1 classic, “American Woman”, while pioneering fusion guitarist John McLaughlin looks back over his catalogue and tells us what it was like playing with Miles Davis, Carlos Santana, Jimi Hendrix and more.

Also in the issue, the returning Vashti Bunyan lets us in on the eight records that have soundtracked her life so far.

Our front section features news on the upcoming Brian Wilson movie, and a riot of an interview with former KLF man Jimmy Cauty, while we meet Philadelphia-based Strand Of Oaks.

In our mammoth reviews section, we look at releases from Scott Walker & Sunn O))), Prince, Leonard Cohen, Ry Cooder, George Harrison and Underworld, check out Kate Bush live and report from End Of The Road festival, with highlights including Gruff Rhys and St Vincent.