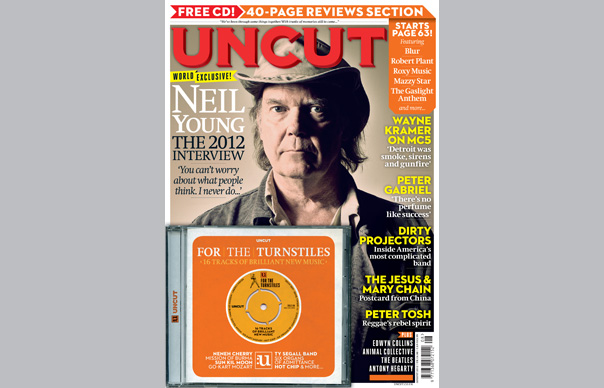 Young graces the cover, exclusively speaking to Uncut about his second album of the year with Crazy Horse, as well as his upcoming autobiography, and Americana.

MC5’s incredible story of wild revolution, intense drug-taking and extreme rock’n’roll is told in detail by the band’s own guitarist, Wayne Kramer, while Peter Gabriel reveals the protracted, bizarre birth of his 1986 hit “Sledgehammer” in this month’s The Making Of….

Elsewhere, Phil Manzanera talks Uncut through the greatest albums he’s been involved with, Peter Tosh’s amazing, tragic story is told, Graham Coxon answers your questions in An Audience With…, and Dirty Projectors show just why they’re the most forward-thinking band in the US.

The expansive, 40-page reviews section features Blur, Robert Plant, Roxy Music, Mazzy Star, The Gaslight Anthem, Sun Kil Moon and the Ty Segall Band, and films including Cosmopolis, Detachment and The Hunter, and books such as Who Is That Man? and The Rolling Stones: 50, are also reviewed.

The issue comes with a fine free CD of hand-picked new music, including tracks from Hot Chip, Sun Kil Moon, Go-Kart Mozart and Mission Of Burma.

The new issue of Uncut is out now on newsstands.