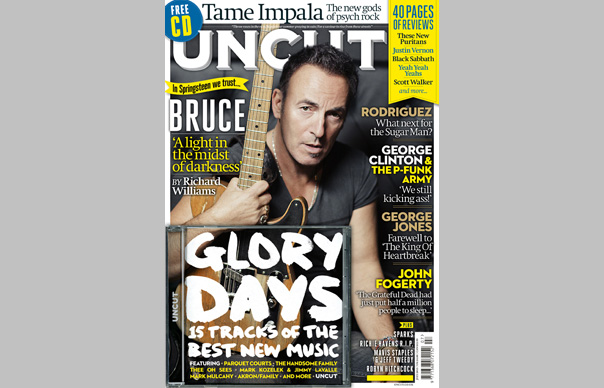 Bruce Springsteen is on the cover, and inside, his colourful time spent touring the UK is recalled by veteran rock writer Richard Williams, who raved about Springsteen in print over a year before Jon Landau’s famous piece.

Sprinkled throughout are choice cuts from Williams’ interviews with The Boss, where Bruce discusses responsibility, crowdsurfing and taking control of his career.

John Fogerty answers your questions on The Black Keys, his brother Tom and Woodstock, Rodriguez looks back at his extraordinary comeback and announces he’s running for mayor of Detroit, and George Clinton of Parliament/Funkadelic reveals why he’s asking President Obama to “save the funk”.

Elsewhere, Uncut editor Allan Jones meets Tame Impala in the Californian desert, musicians pay tribute to late country star George Jones, and The Charlatans recall the euphoric and tragic making of “One To Another”.

Sparks look back over their life in pictures, and Robyn Hitchcock recalls the creation of his greatest albums, from The Soft Boys to this year’s Love From London, while Chic’s Nile Rodgers remembers the records that have soundtracked his life.

In the front section, Gregg Allman talks Muscle Shoals, as a new documentary on the legendary studios is released, Mavis Staples discusses working with Wilco’s Jeff Tweedy again, and we look into Boards Of Canada’s enigmatic return.

Black Sabbath, These New Puritans, Queens Of The Stone Age, The Shouting Matches, Scott Walker and ZZ Top all feature in the 40-page reviews section, and Prince, Yeah Yeah Yeahs and Loudon Wainwright III are in our Live section.

The new issue of Uncut is out today (Thursday, May 23).