Tickets for the Manchester shows will go onsale tomorrow (October 21) 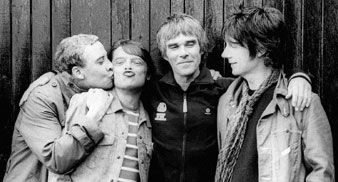 Promoters have announced that tickets for the Stone Roses reunion gigs in Manchester next June will cost £55 when they go onsale tomorrow (October 21) at 9.30am (BST).

The band, who announced their reformation on Tuesday (October 18) at a press conference in central London, will play two homecoming gigs at Heaton Park on June 29-30 in 2012 before embarking on an extensive world tour. Tickets will be limited to four per person, with VIP packages also available, priced at £199 and £299 respectively.

For further information about the gigs, go to The Stone Roses newly launched official website Thestoneroses.org.

To check availability of [url=http://nme.seetickets.com/Tour/THE-STONE-ROSES?affid1nmestory]The Stone Roses tickets[/url] and get all the latest listings, go to [url=http://www.nme.com/gigs]NME.COM/TICKETS[/url] now, or call 0871 230 1094.