Guitarist Viv back in the group after working on anniversary book 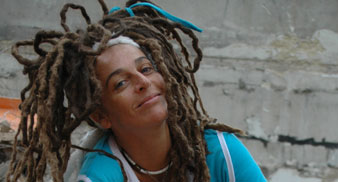 The Slits are set to play their first shows with the original line-up in 30 years, starting this month.

The band, who originally split in 1981, will play two shows at the forthcoming Ladyfest in Manchester on November 9, as well as a headline show at London’s Astoria on December 3.

Frontwoman Ari Up has previously reunited with bassist Tessa Pollitt in 2006, but guitarist Viv Albertine has now joined them again, after all contributed to a forthcoming book to celebrate 30 years since the release of Cut.

The book, ‘Typical Girls?’ (working title) by Zoe Street Howe is due to be published by Omnibus Press next Summer.

Albertine explains her re-interest in playing with the group saying: “Zoe is why I became interested in the Slits again – to see someone intelligent and cool like that being so into what we did had a major effect on me.
And, the book, thank God, it’s about time the Slits got the respect they deserve!”