The Raconteurs Wow Glastonbury With Their First Appearance

Jack White returns to the Pyramid Stage after headlining in 2005 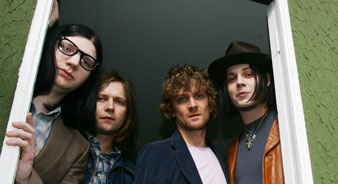 The Raconteurs performed for the first time at Glastonbury yesterday (June 28).

The Pyramid Stage set, which consisted of tracks from the group’s albums “Broken Boy Soldiers” and “Consolers Of The Lonely”, marked Jack White’s third appearance at the festival.

White’s other band, The White Stripes, performed in 2002 and headlined the event in 2005.

The Raconteurs powered through their set, with debut single “Steady As She Goes” ending in a mass sing-along.

The group losed their set with “Blue Veins”, which featured an extended and impressive guitar solo from White.

“Consoler Of The Lonely”
“Hold Up”
“Level”
“You Don’t Understand Me”
“Top Yourself”
“Rich Kid Blues”
“Steady, As She Goes”
“Many Shades Of Black”
“Broken Boy Soldier”
“Salute Your Solution”
“Old Enough”
“Blue Veins”