Apparently, just for one gig 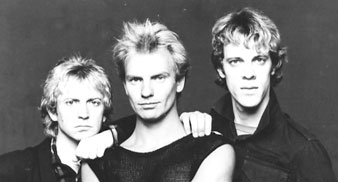 The long-anticipated reformation of The Police has finally been confirmed.
The group have announced that they will perform together at the Grammy Awards next month, the BBC reports.

Sting, Stewart Copeland and Andy Summers’ comeback gig will be the opening act of this year’s ceremony in Los Angeles on February 11.

It is 30 years since the group formed, and rumours have been circulating recently that the trio would undertake a highly profitable anniversary tour.

In a recent interview with Uncut.co.uk, Stewart Copeland was remarkably candid about the prospect of a reunion, dismissing criticism that it would just be a publicity stunt: “Are reformations pointless? Not if the music is really good and there’s an audience for it. I don’t think in terms of strategy; for me, if a show looks like fun, with good players, I’ll go do it and I don’t think about what the ramifications are”

Will the one-off gig tarnish their legacy? “I don’t think in terms of “spoiling” the past,” said Copeland. “If there was a show, I would have no doubt that the three of us would be everything that we’d need to be.”

Today’s announcement has further fuelled industry gossip about the possibility of further concerts – and maybe even that tour. Watch this space for more.