Sting and co to play the US, Europe, Australia and Japan 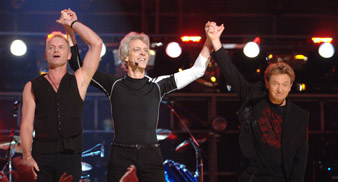 The Police confirmed that they are reuniting for a 30th anniversary world tour, at a press conference in Los Angeles last night (February 12).

Sting, Stewart Copeland and Andy Summers, who split from the band 20 years ago – have finally ended months of speculation about the reunion.

The rock trio’s world tour will begin in May, with thirteen cities in North America have been confirmed so far, culminating with two shows at New York’s prestigious Madison Square Gardens on August 1 and 3.

As well as the usual venues of arenas and stadiums, they will also perform a headline performance at the Bonnaroo Festival in Tennessee on June 16.

Suport on all dates will come from alt.rock band Fiction Plane, fronted by Sting’s son Joe Sumner. Having his son go out on tour with the veterans is in a similar vein to the recently announced Van Halen comeback. Eddie Van Halen, too will have his son Wolfgang playing bass on the road with them.

At the conference at The Whiskey venue last night, The Police played a newly rehearsed set of four songs; “Message In A Bottle,” “When The World Is Running Down,” “I Can’t Stand Losing You” and “Roxanne.”

The Police have also confirmed that will play concerts in the UK and Europe in September and October, before heading to Mexico and Australia. Venues and dates will be confirmed in the coming months.

The US dates in full are:

Click here for complete tour and ticket information from www.thepolicetour.com