“On ‘Sweet Thing’, he asked me to imagine myself as a young, French drummer who was witnessing his first execution,” recalls veteran drummer Tony Newman, recalling the sessions for David Bowie’s 1974 album Diamond Dogs in John Robinson’s cover story for this month’s Uncut, which goes on sale this Friday, February 28. 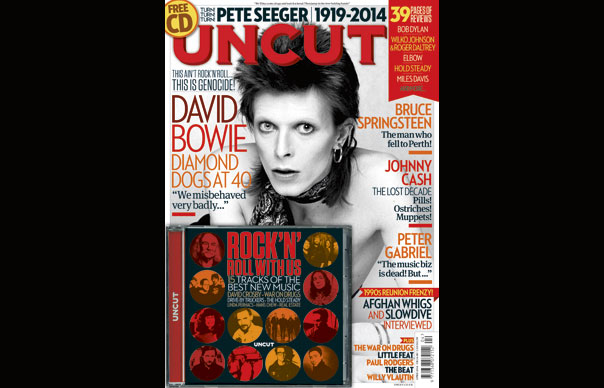 “On ‘Sweet Thing’, he asked me to imagine myself as a young, French drummer who was witnessing his first execution,” recalls veteran drummer Tony Newman, recalling the sessions for David Bowie’s 1974 album Diamond Dogs in John Robinson’s cover story for this month’s Uncut, which goes on sale this Friday, February 28.

Set in a largely ruined future and partly inspired by George Orwell’s dystopian classic 1984, Diamond Dogs was Bowie’s first album of original material following the melodramatic break-up of The Spiders From Mars and the ‘retirement’ of Ziggy Stardust in 1973 and 40 years on the thrill of Bowie moving on from glam into less charted musical territories is vividly evoked by some of his closest associates from a period of exciting transition, a drift away from rock towards what he would later call the ‘plastic soul’ of Young Americans.

Also in the issue, Graeme Thomson navigates the sometimes wayward paths taken by Johnny Cash in the 80s, usually seen as Cash’s ‘lost decade’, when his career floundered and he struggled to make sense of himself and what country music had become.

Elsewhere, we pay a flying visit to Philadelphia to catch up with Adam Granduciel, as The War On Drugs prepare for the release of their brilliant new album, Lost in The Dream. In Los Angeles, we drop in on Greg Dulli, who explains why after he’s reformed The Afghan Whigs who next month release their first album in 16 years.

There’s also a look back on one of my favourite American bands of the 70s, Little Feat, who under the inspired if often unpredictable Lowell George made some of the greatest music of the era before the usually sloppy mess of competing egos and too many drugs eventually did for them, Lowell going off and dying before his solo career had properly got under way.

In our regular franchises, we have An Audience With Peter Gabriel, former Free, Bad Company and – more briefly – Queen vocalist Paul Rodgers talks us through his classic albums and The Beat recall the making of their 1980 hit, ”Mirror In The Bathroom”.

The Uncut review section is as bustling as ever, with new releases from The Hold Steady and Drive-By Truckers, both spectacularly on-form, and releases from Wilko Johnson and Roger Daltrey, Elbow, Real Estate, Metronomy and Linda Perhacs, who breaks one of the longest silences in popular music with the release of her second album, a mere 44 years after her debut. There are also reissues of classic albums by Dr John and Miles Davies and a live review from Australia of a typically triumphant Bruce Springsteen And The E-Street Band show in Perth.

Finally, we bid farewell to the great American folk singer and activist Pete Seeger, who died in January, aged 95.

And I shouldn’t quit this space without mentioning this month’s free CD, which includes tracks from the new albums by The War On Drugs, David Crosby,The Hold Steady, Drive-By Truckers, Sun Kil Moon, Spain, and Linda Perhacs.

I’ll be back soon with a complete tracks listing and some trailers for the CD. In the meantime, enjoy the issue and please share any thoughts about it with. You can find me here:
allan_jones@ ipcmedia.com