The Mighty Boosh to pay tribute to Frank Zappa

They're part of a three-day festival geared towards Zappa 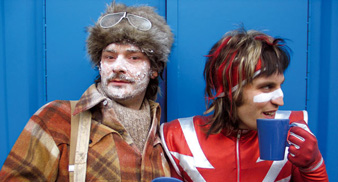 Comedy troupe The Mighty Boosh are set to take part in a tribute event for Frank Zappa this November.

Frank Zappa At The Roundhouse is set to take place from November 5-7 at London‘s Roundhouse venue. The Mighty Boosh Band, featuring Noel Fielding and Julian Barratt, will perform their own take on Zappa songs on November 6.

Musical performances from the late musician’s son, Dweezil Zappa, members of the London Contemporary Orchestra, members of his touring band plus talks, films and exhibitions will also take place over the three days. Gail Zappa, Frank‘s wife, will also make an appearance.

See Roundhouse.org.uk for the full event listings and more information.