McLean and his key collaborators on the creation of one of the '70's biggest hits...

What better time, then, to dig into the Uncut archives for this Making Of… piece from November, 2012 [Take 186], where McLean along with guitarist David Spinozza, bassist Rob Stoner, producer Ed Freeman and engineer Tom Flye tell us the story of this evergreen hit… 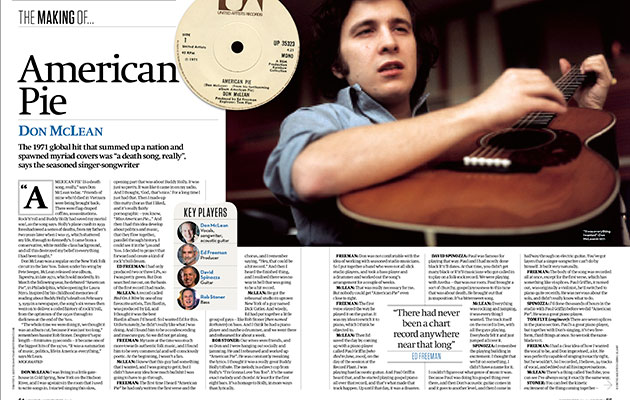 “’American Pie’ is a death song, really,” says Don McLean today. “Friends of mine who’d died in Vietnam were being brought back. There were flag-draped coffins, assassinations. Rock’n’roll and Buddy Holly had saved my mortal soul, as the song says. Holly’s plane crash in 1959 foreshadowed a series of deaths, from my father’s two years later when I was 15, which shattered my life, through to Kennedy’s. I came from a conservative, white middle-class background, and all this destroyed my belief in everything I had been taught.”

Don McLean was a regular on the New York folk circuit in the late Sixties. Taken under his wing by Pete Seeger, McLean released one album, Tapestry, in late 1970, which sold modestly. In March the following year, he debuted “American Pie”, in Ambler, Pennsylvania, while opening for Laura Nyro. Inspired by his childhood memories of reading the news of Buddy Holly’s death on February 3, 1959 in a newspaper, the song’s six verses then went on to deliver a coded history of rock’n’roll, from the optimism of the 1950s through to darkness at the end of the Sixties.

“The whole time we were doing it, we thought it was an album cut, because it was just too long,” remembers bassist Rob Stoner. Despite it’s epic length – 8 minutes 33 seconds – it became one of the biggest hits of the 1970s. “It was a summation of music, politics, life in America: everything,” says McLean.

DON MCLEAN: I was living in a little gate-house in Cold Spring, New York on the Hudson River, and I was upstairs in the room that I used to write songs in. I started singing this slow, opening part that was about Buddy Holly. It was just so pretty. It was like it came in on my radio. And I thought, “God, that’s nice.” For a long time I just had that. Then I made up this nutty chorus that I liked, and it’s really fairly pornographic – you know, “American Pie”. “Miss American Pie…” And then I had this idea start to develop about politics and music, that they flow together, parallel through history. I could definitely see it in the ‘50s and ‘60s. I decided to project that forward and create a kind of rock’n’roll dream.

ED FREEMAN: I had only produced 2 or 3 albums, so I was pretty green. But Don searched me out, on the basis of the first record I had made.

MCLEAN: Ed produced a record called Bird On A Wire by one of my favourite artists, Tim Hardin, and I thought it was the best Hardin album I’d heard. So I wanted Ed for this record. Unfortunately, he did not particularly like what I was doing. And I found him to be a condescending and insecure guy. So we did not get along.

FREEMAN: My taste at the time was much more towards authentic folk music, and I found him to be very commercial and self-consciously poetic. At the beginning, I wasn’t a fan.

MCLEAN: I knew that this guy had something that I wanted, and I was going to get it, but I didn’t have any idea how much bullshit I was going to have to go through.