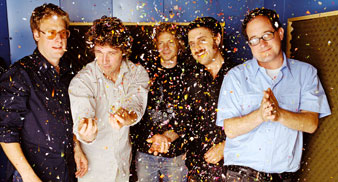 The Hold Steady have expanded their upcoming tour of North America.

Beginning in Seattle, Washington on August 18, the group have added a series of extra shows to their touring schedule in both September and October.

The band are playing in support of [url=http://www.nme.com/news/the-hold-steady/49891]their fifth studio album, ‘Heaven Is Whenever’, which was released in May[/url].

The Hold Steady will play the following: