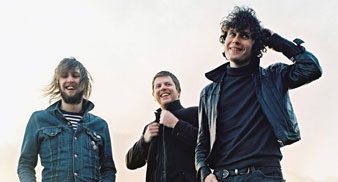 “Pete Doherty is a degenerate waste of space” and a “junkie”according to Glaswegian band, and Uncut faves, The Fratellis.

A Top 5 single “Chelsea Dagger” and Number 2 album “Costello Music” are earning the three-piece comparisons with Supergrass and The Libertines.

Unfortunately, there is little good feeling between The Libs and The Frats.

In fact, bassist Barry Fratelli says, “People should check out The Clash if they want a band to believe in,” adding: “Doherty’s just a junkie.”

In this issue of Uncut, The Fratellis also reveal that they had a spat with another, even more legendary, Pete earlier this year, at T in Park.

To find out about their argument, get the latest issue, in shops now.

In other Libs-related news, Carl Barat reveals to Uncut how he and Pete Doherty used to write songs when they were bandmates.

He says their “personal feelings would fuse together and a story would emerge. I remember lying on my back drunk with the guitar and Pete had some chords and he would be saying, ‘Come on, come on.’”