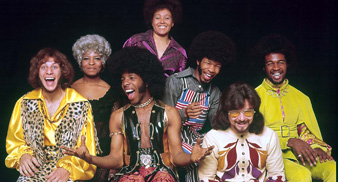 Sly Stone made his first appearance on a British stage in over 20 years on Saturday night. With a new version of his band, The Family Stone, Stone headlined the first night of the Lovebox Festival in Victoria Park, London.

Stone’s show was incredibly brief, but memorable. As reports from European dates had suggested, he did not initially appear as the band – fronted by his sister Vet – rolled out hits like “Dance To The Music” and “Everyday People”.

After half an hour, though, Stone belatedly arrived, and performed moving versions of “If You Want Me To Stay” and “Sing A Simple Song”. He then announced that he “needed a piss” and disappeared, returning later for “I Wanna Take You Higher” and “Stand”.