Rolling Stones Are Sensational As They Kick Off London Dates 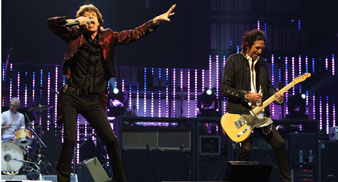 The Rolling Stones’ opening London show at the 02 Arena last night (August 21) was a sensational success.

The first of three nights at the mammoth venue – Jagger, Richards (pictured above) and Wood looked better than ever, as they played through a 2 hour set of classic Stones’ hits.

The show was a slightly stripped down back-to-basics affair, but only in comparison to the massive stadiums they’ve been playing on this European leg of the tour. The Stones played only one track; ‘Rough Justice’ from the most recent album ‘A Bigger Bang’, when they’ve most typically been playing three or four.

‘Rocks Off’, ‘Satisfaction’ and ‘Paint It Black’ were all part of the super-hit laden set.