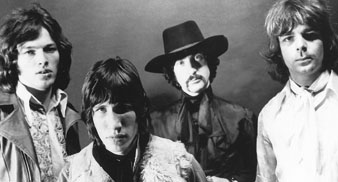 Your affectionate and touching letters and emails have been streaming into the Uncut office since the news last week that Richard Wright had passed away aged 65, after a battle with cancer.

Here are just some of your moving tributes to the late musician:

I just wanted to say a quick word about the tragic passing away of one of popular music’s most original and unassuming keyboard players, Rick Wright.

I would like to express my deepest sympathy to his family. I am 36 years old with a varied taste in all styles of music from indie to rock from acoustic to house.

I have many treasured albums such as Radiohead’s The Bends, The Stone Roses’ The Stones Roses, Peter Frampton’s Frampton Comes Alive and Jimi Hendrix’ Axis : Bold as Love. I like them all for their blinding rhythms, memorable choruses, hypnotic melodies, their “groove” and their original use of the electric guitar – my personal drug of choice!

However – there is one album that will forever remain in my music collection and that is Pink Floyds Dark Side of the Moon. I remember hearing it for the first time in 1994 when I was 22 – a good 22 years after it was originally released. It has become an iconic album of our times but more recently the album art-work or the in-house rift between David Gilmour and Roger Waters has over-shadowed the music on this album itself at times!

I remember hearing for the first time it and thinking “What the hell is this”. It’s unashamedly hypnotic and entrancing. I play the guitar myself and for a long time I thought it was Dave Gilmour’s bluesy, soulful guitar that had me hooked. But how wrong I was! It was so much more that that. What was it? Was it Dave’s voice? No. Was it Roger’s bass? No. Was it Nick’s drumming? No.

What was it that made me put it on if I was having a few friends round or if I wanted to chill out myself? It was the majestic and soulful style that Rick Wright possessed. You can hear it all over the album. The key changes – the middle bits – in the background – all over the album. Think about it – who else plays like that?? No one! “The Great Gig In The Sky” and “Us And Them” are just incredible and have stood the test of time, 36 years after they were released.

I didn’t know Rick as a person – but I will forever remember his melodies and influence he had on Dark Side. He will be sorely missed.

I know him and Syd will be jamming right now as we speak – RIP guys.

Learning of Rick Wright’s passing yesterday really sent shivers down my spine; here is Dave Gilmour new release featuring Rick on keys appearing next week, and this happens. I was motionless and literally cried at my computer when I read the headlines.

His soft voice and restrained Hammond and piano playing were a joy to listen to. He was seemingly shy and self-effacing and his sound in the band almost mirrors his personality; so rarely did his playing overwhelm a composition.

I think one of his best songs (of late) “Wearing The Inside Out” off The Division Bell is just incredibly beautiful with Gilmour’s acute soft picking in the second part of the song, which almost sounds like someone weeping….full of emotion. That’s the song that I listened too off Dave’s live DVD at RAH after I read the obituary yesterday.
Rick really seemed to be enjoying playing keyboards with his friend again, and that love that Dave mentions in his tribute to him is clearly visible on the stage.

My deepest condolences to his family

His music will be played continuously in our home as a tribute to him this week.

Rick was a superb keyboardist and there are so many excellent moments to choose that can sum up the man, from the obvious (the devastating “Great Gig In The Sky”) to his glorious explosion during Breathe (“Run rabbit run!”). I love his playing and from what I’ve seen/heard the man’s temperament. Shine on, indeed. Another legend passes away. RIP.

It is a sad day for me today, I shall always cherish the sweetest Hammond, and piano chords that Richard has played.

I shall always look up at his photos with total admiration and full respect.

I saluted him with the highest respect in February, 1988 at the Sydney entertainment Centre.

Today I say, ‘Goodbye Richard, thank you, and we shall meet again.’

You’ve definitely shaped my soul to enjoy and have a better life.

I first started to get into Pink Floyd’s music around 1972. O, what a discovery for me. Their music has been a joy.

The loss of Mr Wright lays heavy on my heart.

Thank you Mr Wright for some of the best tunes I’ve ever heard.

My name is Juliano, I’m 23 years old and I’m from Brazil – south of the country.
I’m very sad about the news of Richard Wright’s death. I really admired Rick’s work, especially in the first half of the Pink Floyd career. Even since his partnership with Syd Barrett on Piper At The Gates Of dawn and Saucerful Of Secrets. The most notable work in Dark Side Of The Moon was made by Rick – the chord progressions, everything he created was absolutely beautiful.

Here, in Brazil, we all miss Rick. Pink Floyd are still one of the most popular bands here.

Having just read the Uncut obituary on Rick Wright, I’d just like to point out that he appeared with Floyd at their Earls Court gigs in 1994, so although he may not have played onstage with Waters since The Wall, he certainly played a major part in what are probably the band’s best ever concerts. He will be dearly missed as a key contributor to the Floyd sound.

Shortly after the release of the Animals album, I went to see Pink Floyd in concert at the Staffordshire Agricultural Centre. The concert was housed in an enormous shed, which may have been a cattle market and was obviously the largest available enclosed space they could find in the area.

The audience was seated on tarpaulins which were laid over the concrete floor and appropriately, to test their sound system prior to the concert, the band played recordings of tractors crossing the building from one set of speakers to another, which was rather eerie. With the usual audio and visual sound effects and copious dry ice fog, the concert was spectacular.

In the middle, whilst the other band members left the stage for a short break, Richard Wright remained and played a 15 minute classical piano piece which he had composed himself. It was mesmerising and you could have heard a pin drop in the auditorium. Considering that the audience had turned up to see a rock concert, their silence and respect for this man and his beautiful piece of solo piano music was a tribute to his talent as a musician.

I have attended many Pink Floyd concerts since and have enjoyed them all immensely but above all, despite the discomfort of the hard floor and chilling cold from the dry ice, that 15 minute interlude with Richard Wright will endure in my mind for all time. I’m sure that anyone else who remembers that concert over 30 years ago, will agree.
Andy Mitchell

Richard’s death was the saddest news in my life for long time. Pink Floyd are part of my life and provided me with many moments of happiness and also at other times their songs have helped me a lot go in bad times too.

A piece of me is gone with him, and no words can express my feelings. I just wish that people had appreciated his values when he still alive because now it’s just memories. Best wishes for the family and bandmate D.Gilmour who is the only one to speak of how important he was.

NO ONE so far who I’ve seen articles written by paying homage to the late Rick Wright’s musical contributions has mentioned his mid-90’s album, Broken China.

A somewhat sombre affair, it WAS written during and in the wake of his wife’s physical and emotional breakdown due to clinical depression (the art-work for the CD was both stunning and metaphorically relevant to the inner-content’s substance).

Guest vocals by Sinead O’Connor, who proved with her heart-wrenching cover of Prince’s “Nothing Compares to U” that she could get to the bottom of someone else’s composition and appropriate its emotional core as her own, are a highlight. Maybe a bit ‘prog-rockish’ for its time, Broken China deserves some critical re-evaluation now that we know we will unlikely ever get a chance to hear a Rick Wright solo project ever again.