They say 'Californication' is their 'identity' 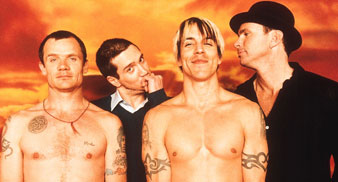 Red Hot Chili Peppers have filed a complaint to the Los Angeles Superiour Court, suing US TV network Showtime over the use of the name ‘Californication’.

The popular dramedy series, airing in the UK on Channel Five, stars David Duchovny as a Hollywood writer.

Red Hot Chili Peppers claim that use of the name ‘Californication’ – which is the title of their 1999 released CD and DVD, as well as the name of one of their biggest hit songs of recent times – is “inherently distinctive, widely recognized and immediately associated in the mind of the consumer and those in the trade”

The band’s front man Anthony Kiedis said in a statement “‘Californication’ is the signature CD, video and song of the band’s career, for some TV show to come along and steal our identity is not right.”

The band are seeking unspecified damages, restitution and “disgorgement of all profits derived by the defendants”.

They also want to stop ‘Californication’ being used as a title in the future.

Showtime Network, the TV show’s creators have not, as yet, commented.