Bassist Flea takes a more prominent role in the songwriting 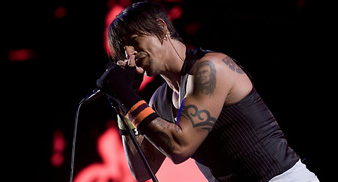 Red Hot Chili Peppers frontman Anthony Kiedis has revealed that the band are close to finishing their new album – and that they also have a working title.

Kiedis said the funk-rockers are currently calling the record ‘Dr Johnny Skinz’s Disproportionately Rambunctious Polar Express Machine-head’ – a title inspired by an acid trip a friend of his once had.

“He [the friend] was reminiscing about one of his legendary acid trips,” the singer told Spin, “and told us that he had been playing a sold-out show to the planets and moons, and his Number One hit was, well, that title.”

Kiedis added that although he is fond of the title the band may change it.

He said: “We found it so funny that we told him for as long as the album was under the radar, that that would be our nickname for it.”

Kiedis added that the follow-up to 2006’s ‘Stadium Arcadium’ has seen Red Hot Chili Peppers‘ sound take on “a whole new dynamic” following the departure of guitarist John Frusciante. Bassist Flea, meanwhile, has been studying music and learning to play the piano.

“Before, some of our jams were a bit hit-and-miss,” Kiedis said. “On this record, a decent number of songs were actually thought out and planned in a way we had never done before. That is, with Flea‘s new knowledge of music theory, we explored the writing process with a bit more precision.”

Flea and Frusciante‘s replacement Josh Klinghoffer visited Africa to gain inspiration for the album, which has been produced by Rick Rubin. The record is still without a release date.