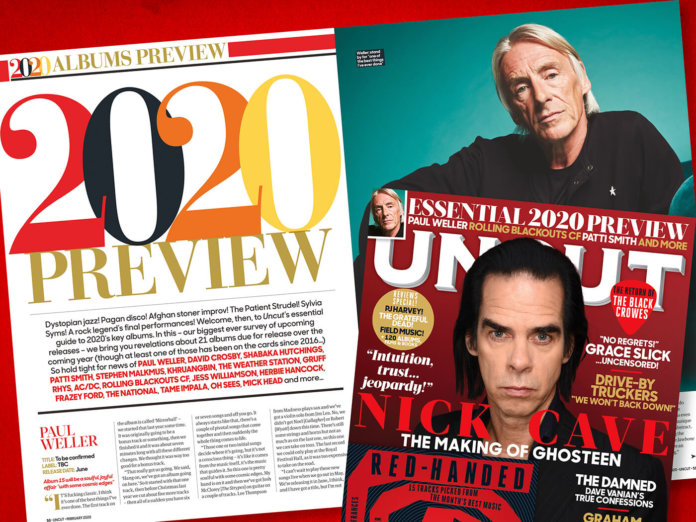 The new issue of Uncut is in shops now – and available to buy online here. As well as looking back at the making of Nick Cave’s Ghosteen and The Temptations’ “Papa Was A Rollin’ Stone”, we look forward to some of the most anticipated albums of 2020.

Paul Weller tells us that his new record, due in June, is “fucking classic. I think it’s one of the best things I’ve ever done. The first track is called ‘Mirrorball’ – we started that last year some time. It was originally going to be a bonus track or something, then we finished it and it was about seven minutes long with all these different changes. That really got us going.”

Rolling Blackouts Coastal Fever also have a follow-up to 2018’s acclaimed Hope Downs due in the summer. “We’ve got one day left in the studio, so it’s an exciting time,” says singer/guitarist Fran Keaney. “I feel like the new songs are slightly weirder, but more fun. I suppose the whole album is a bit more gnarly, a bit of country twang, a bit more disco – which on paper sounds horrible, but it feels exciting. Yeah, outback disco!”

The Weather Station’s Tamara Lindeman discusses how she wrote all her new songs on a piano or keyboard: “Every time I picked up the guitar, I felt like I had written that song before… I wrote about how it feels to be a young person in a world, considering climate change and the reality of what we face.”

David Crosby reveals that “My son [James] Raymond and I are about halfway into the new record. We’re working almost every day. I sent him words last night, he sent me music today. That’s how it’s going. James is on fire right now, absolutely blazing.”