Rage Against the Machine, Queens of the Stone Age To Kick off Reading Festival 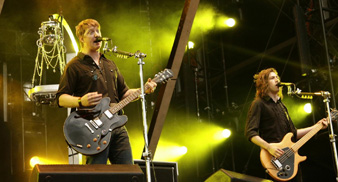 Reading Festival 2008 has kicked off today (August 22) with the biggest Friday capacity crowd to date.

The sun is shining on the Richfield Avenue festival site, and anticipation is HUGE for tonight’s mainstage headliner’s Rage Against The Machine.

The newly reformed Californian band, fronted by Zack de la Rocha are due to play their first show on English soil in a decade (they played Scotland’s T in the Park Festival last month) after reuniting last year to play the US Coachella festival.

Preceding them are Josh Homme’s Queens of the Stone Age who are still showcasing their album “Era Vulgaris” finishing up their European tour at the Reading/ Leeds Festivals with their rock’n’roll drawl.

Headlining the NME/ Radio One stage are Pete Doherty’s Babyshambles finishing a strong line-up that includes New York hipsters Vampire Weekend and MGMT as well as Be Your Own Pet‘s last festival shows (Reading and Leeds) before they split when their UK tour finishes next week.

Over at the Leeds end of the twin-site festival, the mighty Metallica are set to headline tonight, with Arctic Monkey‘s Alex Turner’s collaboration with Miles Kane; The Last Shadow Puppets set to headline the NME/Radio One Stage.

Stay tuned to Uncut.co.uk for updates and photos (there are some impressive t-shirts, costumes and flags!) from the Bank Holiday weekend festival, we’re very looking forward to seeing Manic Street Preachers, Jack White and Brendan Benson’s The Raconteurs and Metallica across the three day festival.